You are here: Home » Anne Levy’s Story and How Education Fights Anti-Semitism

(COVINGTON, La.) — The Holocaust is one of the most devastating genocides in history with six million Jewish men, women, and children murdered at the hands of the Nazis. The Holocaust is the result of anti-Semitic rhetoric centered around the political ideology of national socialism, an offshoot of fascism. Ideas of white supremacy and strong national identity lead to the attempted extermination of the Jewish people. 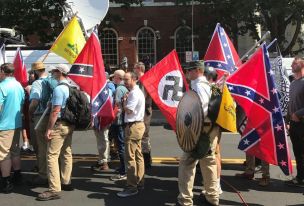 Unfortunately, this ideology is far from extinguished. Neo-Nazis, as well as modern tenets of white nationalism and supremacy, hark back to the ideology of Hitler’s regime. This is emblematic of the rise of authoritarianism both domestically with the alt-right and internationally with the rise of illiberal democracies in Eastern Europe. Protestors in the “Unite the Right” rally in Charlottesville, Virginia chant “Jews will not replace us,” while synagogues nationwide are vandalized, including a synagogue in Mandeville, Louisiana in September of 2018.

Neo-Nazis and anti-Semites target youth (especially youth in low-income households), which is why it is imperative to teach the atrocities of the Holocaust in schools nationwide. History repeats itself; without sufficient education, the risk of anti-Semitism rising in the political scene only increases, embodied in former Louisiana representative and white nationalist David Duke- an avid spokesperson for the alt-right today. As the alt-right grows larger it begins to permeate into the mainstream online through websites like Reddit, Instagram, and 4chan. As the GOP grows further right (part of a greater trend of radicalization in both parties) alt-right talking points are discussed and considered, pushing them further and further towards legitimate political positions.

At St. Paul’s, one of the last Holocaust survivors in Louisiana, Anne Levy, told her story growing up in Poland during Nazi occupation. Anne Levy was sent to the Warsaw ghetto with her mother and sister, barely surviving on meager food rations, surrounded by death. 400,000 Jews lived in 1.3 square miles in the Warsaw ghetto. Anne Levy recounted to the school memories of naked bodies in the streets and hiding in a secret trap door in a cabinet with her sister while her mother worked in the factory. 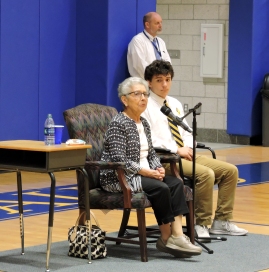 A child at the time, Anne Levy was at great risk of being sent off to a concentration camp, spending hours and hours at a time hiding in the cramped cabinet with her sister only narrowly avoiding Nazis searching their room. Anne Levy’s father eventually returned to his wife and two children in the midst of starvation. Her father then arranged for the family to be transported from the ghetto in a garbage truck, securing escape from the ghetto and the horrors of the concentration camps.

Stories like these are essential to educating young people about the horrors of anti-Semitism, a step towards ensuring that these events don’t repeat in the future. With the remaining Holocaust survivors dying out worldwide, these imparted experiences may be the single best insurance against these atrocities- an invaluable weapon against bigotry and hatred worldwide.

Hal is a senior at St. Paul's School. He is the Editor-in-Chief for The Paper Wolf as well as the speech and debate team captain and founder. Hal is also the school columnist for The Advocate and thinks that Captain America is the most boring Avenger. Contact Info: hal.fox.2020@stpauls.com, 985-974-6344 View all posts by Hal Fox →