You are here: Home » Wreck-It Ralph Roars into Theaters

Since the early 1990s, Hollywood has played with using video games as inspirations for movies. Beloved games series like Mortal Kombat, Resident Evil, Lara Croft, and even Super Mario Brothers have been adapted to the silver screen, all with varying results. With the recent release of a Silent Hill film and with Halo, Metal Gear Solid, and God of War all reportedly being brought to theaters soon, video games seem to be a popular medium for movie adaptations. Though moviegoers have typically been less than kind to these adaptations, movies using video games as a prominent point, like the classics Tron and War Games, usually fare better. 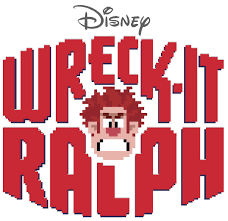 Disney’s newest animated outing “Wreck-It Ralph” follows the latter premise. The story follows Wreck-It Ralph, the villain in the popular (and fictional) arcade game Fix-It Felix, Jr. Ralph is the fundamental big softy; he might be programmed to destroy the game’s tower so that Felix can fix it and be the hero, but really all he wants is for people to like him. After being spurned by the citizens of the tower during an after-arcade-hours party, Ralph decides to go to another game, where he can win a medal and come back as a hero.

It’s an intelligent premise, and it gives the movie breathing room to move around. As Ralph departs from Felix, Jr., he rides a subway to “Game Central Station” (in reality, he’s traveling through the game cabinet’s power cord to the central power unit of the arcade), where he heads off to numerous games, including Hero’s Duty– a mix of Starcraft and Call of Duty–and Sugar Rush, a sort of Mario Kart racer mixed with Candy Land scenery.

Despite the plot allowing for a diverse array of different game worlds, the only worlds Ralph travels to are his own, Hero’s Duty, and Sugar Rush. It’s a bit disappointing that the film could have been so expansive but ultimately feels limited, especially during the third act in the Sugar Rush world, where the pacing hits a brick wall (I felt myself checking my watch more than a few times).

Even if the team at Disney dropped the ball in terms of scope, they did a fantastic job at game references. Even though most of the plot-important games are fictitious, many real characters can be seen. In the beginning, when Ralph is attending a support group (think Alcoholics Anonymous for Villains), characters like Eggman from Sonic, Bowser from Super Mario, and Zangief from Street Fighter can be seen, along with less well-knowns like a zombie from House of the Dead, and even Satan from Diablo (In what other Disney film can you hear dialogue like “Thanks, Satan!” “It’s Sayteen now.”?). Even if you don’t know much about video games, you’ll likely still find humor in Mario and Sonic’s appearances in the movie, while gamers will appreciate all the subtle references to older games (look out for the graffiti in the subway in particular).

Ralph works on his “issues” with his video villain support group.

What really impressed me most about the film was the voice acting, music, and animation. The cast–which includes John C. Reilly (Cal from “Talladega Nights”), Jack McBrayer (Glenn from “Talladega Nights”), Sarah Silverman, and Jane Lynch–all do a great job with voicing the characters. Reilly, in particular, gives a great performance and range in Ralph, voicing melancholy all the way to happiness in equal strides. The music is very well done as well, with music by artists like Skrillex, Owl City, Kool and the Gang (yep, the guys who did “Jungle Boogie”) providing new material, as well as the original soundtrack doing a perfect job at providing emotion for the film. Finally, the animation for the film is truly superb. The colors, the style, I loved it. The facial animations, in particular, impressed me the most, and the emotion in them will make you feel a part of the film.

Despite an expansive world hindered by a limited plot, “Wreck-It Ralph” is a fun ride for people of any age. The humor is pretty assorted, so everyone will have something to laugh at. Even though the plot fumbles a bit in the second half, the technical aspects and humor make up for it, making “Wreck-It Ralph” the animated film to see this year.

View all posts by mvsp1 →