You are here: Home » St. Paul’s Cools Down On Ice Bucket Challenge

(COVINGTON, La.) – Several students at St. Paul’s School have joined thousands in turning against the ALS Ice Bucket Challenge over the past several days, citing the internet sensation as “overused and boring,” while other members of the SPS community have found an even deeper problem with the seemingly positive mission, pointing to moral problems with the ALS Association’s spending.

Because of this, New Orleans Archbishop Gregory Aymond urges participants to donate instead to Team Gleason, a local organization created by former New Orleans Saint Steve Gleason, who was diagnosed with ALS in 2011.

The Ice Bucket Challenge stipulates that once nominated, candidates have 24 hours to complete the challenge. Participants are expected to donate $10 for completing the challenge or $100 for declining. However, St. Paul’s senior Andrew Brouillette finds the challenge to be ineffective.

Celebrities have certainly contributed, as well as many others who view the Challenge as more than an excuse to create a funny video while dumping cold water over themselves. According to the Boston Globe, more than $94 million has been raised to find a cure for what has often been referred to as “Lou Gehrig’s Disease” after the wildly-popular New York Yankees First Baseman who became the first known celebrity to contract the disease.

Those who wish to learn more about ALS or donate to Team Gleason can find more information at www.teamgleason.org. 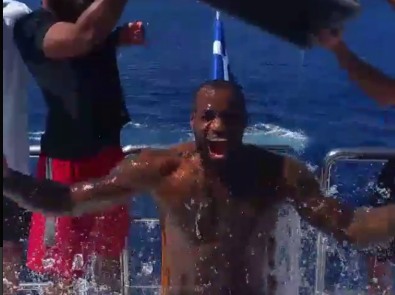 Cleveland Cavaliers SF LeBron James is but one of the multitude of celebrities to take on the Ice Bucket Challenge
(Photo credit: MTV.com)

You walk with him. You hear him taking trombone solos or singing at Mass. You can catch him as John the Baptist in Godspell. Now you can read his thoughts as he exercises his rights to life, liberty, and the pursuit of happiness. View all posts by Casey Fitzmaurice →