You are here: Home » Olympia, Endymion, and Bacchus…Oh, My!

(COVINGTON, La.) — Sprained ankles, strained backs, nosebleeds, split lips, and dehydration. This sounds like a list of injuries from a rugby game, but it is instead a record of a few of the injuries common for the St. Paul’s Marching Wolves, especially during parade season.

This year’s Mardi Gras was an exciting one, with food, drink, parades, and music. Speaking of music, marching bands, more specifically the Marching Wolves, travel the entire length of the parade playing great music. Neither rain, nor shine, nor horrific injuries will keep the band from putting on a fantastic show.

The Wolves marched with the Krewes of Eve, Olympia, Hermes, Endymion, Bacchus, and Carrollton. With some of these parades being upwards of seven miles in length each, and the two-weekend stretch totaling over 28 miles altogether, one can imagine the sheer fatigue of it all; constantly blowing air through instruments and hitting drums can take a lot out of anyone. The Marching Wolves also, unlike most other Mardi Gras bands, dance and jump around for the enjoyment of the crowd, which only adds to the fatigue. 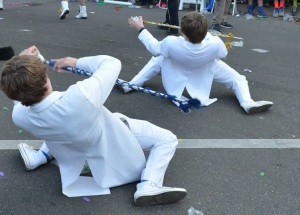 Drum Majors Lane Sumrall and Dustin Simoneaux break it down during “Medicine” in Endymion.

The routes are also strewn with dangers. Loose beads and potholes are among the hazards that never fail to cause a band member to trip or hurt themselves. During two different parades, Junior drum major Dustin Simoneaux stepped in a pothole and fell, rolling his ankle in the process, but kept on marching and high-kicking through the pain as if nothing happened. Unless there is blood or significant pain, it is almost always required that injuries wait until after the parade to be treated. The expression “walk it off” is not taken lightly when it comes to marching in parades.

On occasion, a debacle with a float occurs, causing the parade to come to a stop. One would think that during these stops, the band would take a break and rest themselves, as other bands do. Instead, they spread out, get into position, and dance and play even more. The more complicated and elaborate dances are saved for the stops in the parade to show off what sets the Marching Wolves apart from everyone else.

There are sometimes freak accidents that occur. On the Carrollton route, senior drumline member Jacob Authement was playing his bass drum when, out of nowhere, he dislocated his wrist. He went to his mother, who was chaperoning the parade at the time. She popped the wrist back into its socket, and Jacob continued marching and playing like he had never stopped. Things like this do not occur often, but they do not slow the Marching Wolves in the slightest when they do.

Although band is not a sport like soccer or football, it is no less physically demanding. It has injuries like any sport, except during Mardi Gras, instead of playing for 1500 people at the most, the Marching Wolves play for 150,000 people at the least. They also have that many more reasons to get up and keep playing when they fall.

All photos by Andrew Moran.

Ethan Molitor is a junior at St. Paul's School in Covington, Louisiana. He is also a proud resident of the United States of America. He enjoys hanging out with his friends. He is also a well-rounded musician and plays guitar and piano and is a very involved member of the Marching Wolves. His favorite country is, undoubtedly, America. View all posts by Ethan Molitor →