You are here: Home » Ashcraft Embarks on Next Adventure, Concludes Tenure at SPS 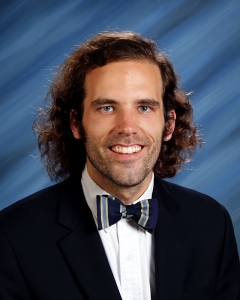 (COVINGTON, La) – Recognized throughout campus by his lengthy hair and inimitable clothing — most of which he regularly announces was obtained from the local Goodwill — Philosophy and Religion teacher Austin Ashcraft has morphed the lives of many in his relatively brief three-year tenure at St. Paul’s. Regrettably, at the conclusion of this school year, the widely attributed teacher will depart St. Paul’s in pursuit of a master’s degree, or the possibility of running a tea house in the Himalayas.

Ashcraft has been known for his deep inquiries concerning kids’ faith and often speaks of his own “crazy” journey of finding his. He was raised in a Catholic environment, but didn’t really feel a calling from God until his sophomore year in high school.

“In my sophomore year I switched schools, actually from Catholic school to public school ironically enough, and I just started having a lot of questions about life,” Ashcraft said. “My friend ended up dragging me to youth group, and I swore I would never go to that because I thought those people were weird. I really ended up going because there were some girls that I kinda wanted to hang out with. But while hanging out with them, the youth minister presented some things to me that sounded very logical, and I’m a very logical person, so I kept going back week after week — for girls and logic, two of the finer things in life. 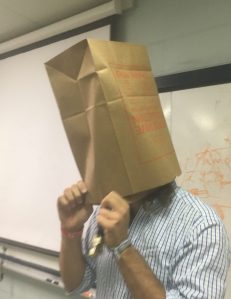 “So it was all throughout the year that all the stuff lined up in my head, and I thought that if all the stuff the (youth minister) said is true, then that really changes everything about my life. But I was still scared to death about doing anything about it because of what my friends would think or whatever. Then I went to a youth conference that summer and had a pretty powerful encounter with Christ and the adoration, and at that point it was game over.”

This story resonates throughout St. Paul’s because teens can actively relate to it. Many SPS students find themselves in a conundrum of faith, academics, and temptation, and hearing accounts like this revive the idea that faith and spirituality can always be found. Ergo, Ashcraft has coagulated a group of students and profoundly affected their philosophical and spiritual vision, including that of Student Body President-elect William Murphy.

“It’s hard to articulate how much Austin means to me and the student body briefly,” Murphy said. “He has played just a tremendous role in my life as a truly engaging teacher, thoughtful counselor, and fierce, fierce friend — not just to me, but countless other kids at St. Paul’s. On a personal level, we have gone to Ohio on a college tour, spent summers in the wilderness of North Carolina, explored the streets of Rome, and gone on numerous other adventures that I am grateful for; I think St. Paul’s all agrees that we will be sad to let him go, but we also know that he is going to do great things wherever he goes.”

Indeed, in an only three-year tenure here at St. Paul’s, Ashcraft has given students many opportunities to go on mission trips, retreats, and adventures quite literally all over the world. On these outings, Ashcraft takes the opportunity to interact with students in a truly humanizing way.

In the classroom, Ashcraft conducts a theology class like no other at St. Paul’s. He doesn’t abide strictly to the St. Mary’s Press textbooks that students at St. Paul’s are all too familiar with. Instead, he creates his own curriculum from the ground up. Rather than primarily educating on the church’s history and teachings, Ashcraft capitalizes on making known the logic and spirituality of pure faith. The foundation of this unique curriculum is classroom debates. These are opened by Ashcraft presenting a point either “proving” or “disproving” the existence of God. Importantly, the focus is not directed towards the credibility of Catholicism, but the question of any God’s existence. As students verbalize their various observations, Ashcraft immediately assumes his role of the devil’s advocate, contesting points with counterpoints further developing the students’ thought. After Ashcraft has accommodated every student’s intuition, he offers up his own reasoning for the existence of God and why he embraces Catholicism, making great strides to insure that each student comes to his conclusion on his own. The capstone of the curriculum is formulated by each student, and that capstone is the transcendence of each student’s faith. Ashcraft recognizes this and adheres to the fact that faith cannot be determined wholly by logic.

“I think a lot of students have things click in their heads throughout the year, similar to how I did,” Ashcraft said, “but I always tell my students that it can’t be a purely logical or theoretical thing. Christ is a person, therefore you have to encounter him as a person.”

After this year, Ashcraft will attend graduate school at the Notre Dame Seminary in New Orleans, and will be a minority amongst the scores of seminarians. Previously, Ashcraft majored in Theology at Franciscan University, a Catholic institution in Steubenville, Ohio. He has dabbled in philosophy classes at Notre Dame Seminary before, and is considering studying to gain a Master’s in Philosophy, alongside Theology.

Now that his departure motive has been announced, Ashcraft revealed that it was never his intention to stay here for as long as he did.

“(Teaching here) has awoken a vocation that I didn’t know I had,” Ashcraft said, “I had never desired to be in education at all. When I took this job, I just thought it would be something fun to do for a year, because I was at a point in my life where I just did things for a year, traveled, and was never really committed to anything, which was my intent. But it has been a huge gift, and I’m not saying that just to be cheesy; in many ways, it has helped me.”

AUTHOR’S NOTE: I have had the pleasure of participating in Ashcraft’s Religion II class this school year, and I can declare without hesitation that I have never actively learned in a more cerebral, revealing environment. More personally, I have never had a teacher that I can confide in and converse with like Austin. Thanks, Coach; that’s a good looking shirt.