You are here: Home » Wolves Weigh in on 2016 Heisman Hopefuls

(COVINGTON, LA) — The first few weeks of college football always show fans if their pre-season Heisman hopeful can live up to the hype, and if any “sleepers” can step up to the plate. The first three weeks of the 2016 college football season have already been entertaining, interesting, and for those in the Bayou, somewhat disappointing. Being only a little over an hour’s drive from Baton Rouge, many at St. Paul’s are still feeling the “Fournette Fever.”

“I’m still liking Leonard’s chances on making it to the Heisman ceremony,” SPS junior William James said. “He started off slow, but he looked great against Mississippi State.”

Junior LSU Running Back Leonard Fournette barely missed attending the Heisman trophy presentation ceremony in New York last season after a disappointing second half of his sophomore season. After week three of this season, Fournette has 285 rushing yards with two TD’s along with 65 additional receiving yards. LSU moves to a 2-1 record after beating Mississippi State this past Saturday.

So who else is shaping up to be a 2016 Heisman Trophy Ceremony attendee on December 10?

There’s a very good chance you could see standout Louisville quarterback Lamar Jackson, who has appeared out of nowhere to the top of Heisman hopeful list. He has thrown for an astounding 913 yards and eight TD’s and 464 rushing yards with 10 TD’s. His number three ranked Louisville Cardinal team is now 3-0 after crushing the former number two ranked Florida State 63-20 this past Saturday. 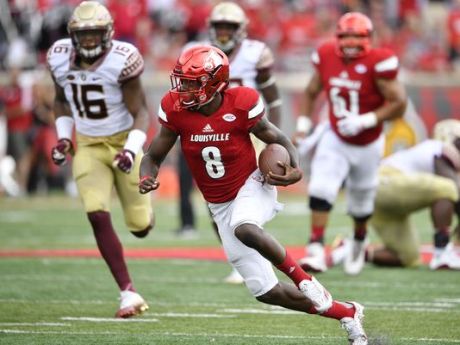 “As of now, Lamar Jackson has the best chance at winning it,” SPS junior Patrick Baldone said. “He completely lit up the number two team in the country. He’s got to continue to do well, though.”

You may also see Stanford running back Christian McCaffrey. McCaffrey, a junior, also made it to the Heisman Trophy Ceremony last year, and like Fournette, fell short to Alabama running back Derrick Henry. After week three, McCaffrey has 298 rushing yards with three TD’s and 106 receiving yards with one TD. His Stanford squad is 2-0 after beating Kansas State and USC.

Those wanting to see these Heisman hopefuls and others during week four will have some great matchups to choose from. Christian McCaffrey and his Stanford Cardinals play PAC-12 rival UCLA, Lamar Jackson and the Louisville Cardinals play Marshall, Deshawn Watson and his Clemson Tigers take on a 3-0 Georgia Tech team, and finally, Leonard Fournette and the LSU Fighting Tigers take on Auburn.

One Comment on “Wolves Weigh in on 2016 Heisman Hopefuls”