(COVINGTON, La.) — During St. Paul’s football season, the Marching Wolves file into the band room each Friday at 5:30 p.m. to prepare for the night’s highly-anticipated game. The school day concludes at 3 p.m. following announcements, however, providing two hours and 30 minutes for hungry Marching Wolves to walk to inexpensive restaurants near campus, such as Sonic or China City, where they ravenously satisfy their hunger. If lucky enough, some may pile into an upperclassman’s car and venture to a more distant venue — such as McDonald’s, Wendy’s, Chick-fil-A, or Izzo’s Illegal Burrito — to grab a quick bite to eat. Car rides typically consist of obnoxiously loud music, awful attempts at singing, and friendly banter. Back at campus, several Marching Wolves enjoy recreational pick-up games of basketball, football, and ultimate frisbee as they await the “call time” of 5:30 p.m.

As “call time” nears, the Marching Wolves excitedly enter the band room, where preparations for game time at 7 p.m. are in full swing. First, they dress in their uniforms, taking special care to place their signature hats safely off to the side. In observance of the aged “no hats in the band room” tradition, Marching Wolves never place their hats upon their heads while inside the band room. Next, they assemble their instruments, unload their equipment, tape their drumsticks, wrap their fingers, hands, and wrists to prevent blistering during performance, and start “warming up.”

Tuba section leader Cameron Holmes “warms up” along with the remaining members of his section. (Photo by John Meyers)

At the resounding blow of a drum major’s authoritative whistle, the Marching Wolves assemble by section in an orderly formation known as “concert block.” Here, they “warm up” as a collective unit, and swiftly review the songs, cadences, and dances included in the evening’s elaborate halftime field show. When the thunderous music concludes, the Marching Wolves’ chaplain confidently takes the podium. Here, he reverently leads the Marching Wolves in St. Paul’s traditional prayer along with the Clown’s Prayer, a prayerful poem adopted by the Marching Wolves that is typically recited by faithful performers before they take the stage. Additionally, the chaplain invites members of the Marching Wolves to communicate their special prayer intentions. Finally, through a pep-talk themed speech, the chaplain offers last-minute words of encouragement, motivation, and preparation to his fellow Marching Wolves before they exit the band room and sternly enter “performance mode.”

With a sharp whistle “call off” and a resonant “hey!”, the Marching Wolves exuberantly step off towards Hunter Stadium. Before entering the lively stadium, they greet, shake hands, and exchange remarks with Bro. Ken Boesch, FSC, who joyfully awaits the Marching Wolves’ arrival at Hunter Stadium before every football game. As they pass through the gated side entrance, several Marching Wolves jump and tap the gate’s overhead crossbar for good luck.

Once inside Hunter Stadium, the Marching Wolves quickly expand outward onto the track in a spread-out formation known as “parade block,” where their immaculate white shoes glisten brightly against the track’s faded red stubble. Here, with chests stuck out victoriously, knees maintaining sharp 90 degree angles throughout each stride, and eyes filled with intense pride, the Marching Wolves play, dance, and shout as they eagerly inch towards the crowded home stands. 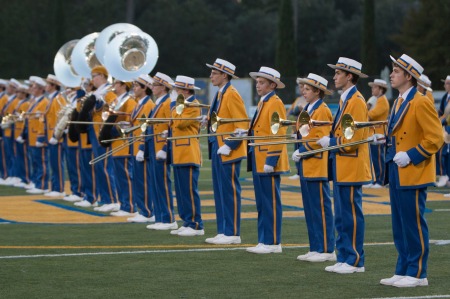 The Trombone section stands at attention during the Marching Wolves’ pregame performance. (Photo by John Meyers)

In front of the home stands, the Marching Wolves’ pregame show finally begins. First, they play “Drumathon,” an intense tune that excites listeners with loud, powerful notes. Then, the Marching Wolves confidently take the field, where Hunter Stadium’s beaming lights shine down gloriously upon them as they proudly lead the home crowd in the “St. Paul’s Fight Song.”

When the football team settles at the home sidelines, the Marching Wolves solemnly march upon the football field. Here, they respectfully participate in the night’s prayerful invocation, and play the “Star Spangled Banner” while the drum majors salute the flag. As the Marching Wolves step off the field and enter the home stands, the night’s long-awaited football game finally kicks off.

For the Marching Wolves, observing an SPS football game is always very exciting, amusing, and, most of all, fun. In the stands, the Marching Wolves are positioned next to the lively student section. Here, they enjoy an excellent view of the Friday night football action as they cheer the Wolves on to victory. All the while, they play their favorite traditional tunes, such as “ESPN,” “Word Up,” “You and I,” “Friends,” and “Fun,” as well as their own renditions of modern songs, including “Dark Horse,” “Crazy in Love,” and “Can’t Stop the Feeling.” In between songs, the Marching Wolves “get down” and dance to intricate cadences skillfully played by the drumline. 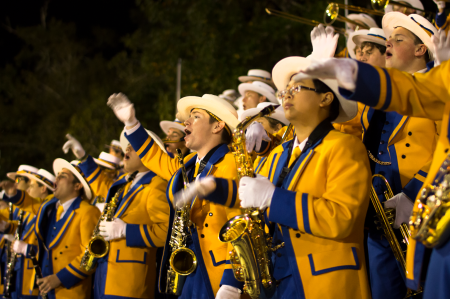 The saxophone section enthusiastically cheers on the Wolves to victory from their position in the home stands. (Photo by Brandon Gallego)

While his fellow Marching Wolves dance behind him, senior Marching Wolf Mark Larson concentrates as he plays his snare drum during “third quarter jam.” (Photo by Brandon Gallego)

As halftime concludes and the third quarter of football commences, the Marching Wolves position themselves on the track directly in front of the student section for “third quarter jam.” Here, they direct their massive sound specifically towards the overcrowded, enthusiastic student section. With roaring, boisterous songs like “Shake It,” “AP Touro,” “Put Ya Hands Up,” and “Bernie,” the Marching Wolves enliven their fellow students, and ultimately inspire them to cheer on their competing Football Wolves. Some tunes, specifically “Sweet Caroline,” evoke spirited singing participation from the student section. Also, through convoluted cadences such as “Ecology,” “Motivation,” and “Tick-Tack,” the Marching Wolves successfully showcase their finest dance moves.

Following “third quarter jam,” the Marching Wolves return to their places in the home stands. Soaked with sweat, they triumphantly stomp up the aluminum steps, receiving countless high fives, pats on the back, and cheers as they progress past the ebullient student section. Exhausted and out of energy, the Marching Wolves collapse onto their seats where they quickly savor a brief break, allocating just enough time to quench their itching thirst before rising again to continue playing their horns, banging their drums, and clashing their cymbals.

The Marching Wolves’ horns gleam and shine as they play to the student section during “third quarter jam.” (Photo by Brandon Gallego)

Finally, when the football game reaches a close, the Marching Wolves conclude the evening at Hunter Stadium with the “St. Paul’s Fight Song.” Then, they return to the band room, receiving reassuring cheers of achievement and success as they march past the fleeing crowds.

In accordance with tradition, the Marching Wolves gloriously play the “St. Paul’s Fight Song” upon arrival back to the band room. When the song concludes with a spirited “hey!”, band director Andrew Moran takes the podium, where he commends the Marching Wolves on their superb performance. Then, they are called to “parade rest” and given the command to “fall out.” From here, the Marching Wolves disassemble their instruments, put away their equipment, and submit their uniforms to the Quartermaster, whose responsibility is to properly return the Marching Wolves’ uniforms to their Lasalle Hall storage closet. By the time all these tasks are successfully completed, it is nearly 10 p.m.

Senior trumpet section leader David D’Antonio smirks as his face glistens with sweat, the product of his hard work. (Photo by Brandon Gallego)

Yet, as the weary Marching Wolves groggily leave St. Paul’s campus, they already yearn for the next Friday night football matchup. With long, grueling practices scheduled after school on Monday through Thursday each week, the Marching Wolves dedicate sizable amounts of time perfecting every aspect of their extravagant performances. When dressed in uniform, however, all this preparation pays off.

Editor’s Note: Although football season has come to an end, the grueling rehearsal and conditioning schedule has not, for now the Marching Wolves must prepare for the upcoming parade season, when they’ll have to march, dance, and perform for over 26 miles of parade routes.