(SHREVEPORT, La.) — The long-awaited State Tournament finally came for the wrestling wolves Feb. 10 – 11 in Shreveport. The intense and long training paid off for many of the wrestlers, as they had three state champions and finished fourth in the state as a team. 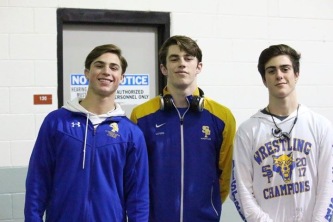 Although not all team members claimed a top individual prize, many were encouraged by personal improvement this season.

“This year was a step in the right direction,” junior wrestler Grant Hughes said. “I won or placed highly in every tournament I competed in, and although I finished third in the state, I am in no way satisfied with that. My goals for next year are to go undefeated, win an individual state title, and lead my team to its first Division I state title.”

For senior Shane Ulfers, this was his last year to win the state title he’s been working for his entire high school career. He did this with flying colors as he re-matched and beat a wrestler he lost to in the finals of the Louisiana Classic.

Shane Ulfers celebrates after winning in the state finals. (Photo by Keren Davis)

“This season was good,” Ulfers said. “I started off strong. I had a few bumps, I had a loss in a major tournament, and since that, I was very focused, and I was able to get it done at the state tournament. I really felt good after winning state, and I really wanted some ice cream after. All the hard work paid off, and celebrating with my teammates was fun. Do what you love and don’t listen to what other people say; you do you.”

The wrestlers are not the only ones who achieved victory this season. With three state champions and three placers, the coaches were pretty satisfied with their work.

“I think the team came a long way from the beginning of the season to the end,” said Coach Matt Pinero. “Our more experienced guys did well from start to finish, while our less experienced guys saw a great deal of improvement. As for next year, nothing changes. The goal is always the same: work hard and get a little better every day. If we do those things, we have a group that’s going to be pretty darn tough next year.”

For some, the tournament did not go so well. Junior Jake Arena broke his foot in the quarter-finals while wrestling an opponent from Brother Martin. This ended his chances of placing and ended his season, as well. However, this won’t stop him from competing next year.

With the close of the state tournament, the wrestling season is now over, in terms of high school folk-style wrestling. Off-season training and the freestyle season will start in a few weeks.