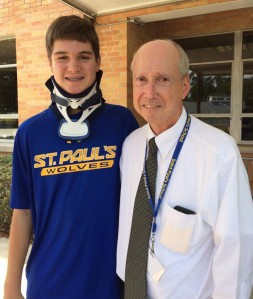 Brother Raymond Bulliard, FSC, walks Reagan around the St. Paul’s campus upon his arrival back at school after his injury. (Photo: Thepaperwolf.com)

(COVINGTON, La.) — In July of 2014, St. Paul’s senior Reagan Hill sustained fractures in his C5 and C6 vertebrae while playing in a pool, initially leaving him paralyzed from the neck down. At the time, the notion of him ever walking again was uncertain. However, on Aug. 29, 2014,  Reagan was discharged from the hospital after just six weeks, and soon returned to St. Paul’s on his own two feet. While recovering, Reagan requested one of his favorite meals: a Peanut Butter Burger from Mugshots Restaurant. Upon hearing of this, Chris McDonald, a St. Paul’s alum and founder of Mugshots, sent Reagan and his entire medical team meals regularly. Since then, Reagan has attributed his recovery largely to McDonald and his support.

“He gave me an opportunity to do what I think I was meant to do,” Reagan said. “So much was uncertain in my life at the time, but when he gave me that opportunity, he also gave me a little certainty that I would be able to do something once it was all over. He gave me hope.”

Shortly after his full recovery, Reagan made the decision to give back, and teamed up with McDonald to create what would come to be known as “Reagan’s Peanut Butter Project.” This charity takes proceeds from the sale of peanut butter products from three restaurants, Mugshots, Glory Bound Gyro Company, and Topher’s Rock ‘N Roll Grill, to “make life grand and help others shine by providing smiles, laughter, and HOPE one Peanut Butter Burger at a time.” The charity has now raised over $12,ooo and has aided in the recovery of about 900 individuals with several types of injuries and conditions.

In recognition of his efforts, Louisiana Public Broadcasting and the Rotary Club of Baton Rouge have deemed Reagan a “Louisiana Young Hero.” Reagan is one of just nine Louisiana students receiving the prestigious award, and will be honored by the St. Paul’s community in today’s President’s Assembly (March 14). Also, a reporter and cameramen from the public access station will be present on campus to film a short video on Reagan and his affect on St. Paul’s and the community.

“Winning the award is a huge honor,” Reagan said. “I’m beyond grateful to Sean Noel and his mother who both nominated me and to all of the people who wrote letters backing up their nomination. Honestly, I don’t feel like I deserve it. I just try to do what I think people are supposed to do: help others.”

Louisiana Young Heroes Day will be on Monday, April 3, 2017, and will honor the 2017 winners at a breakfast at LPB’s studios, a lunch at the Governor’s Mansion, and a final banquet in Baton Rouge where the awards will be presented by the city’s Rotary Club members.