Abbot Justin Brown, who oversees most of the Abbey’s operations, bestows a warm greeting upon Pope Francis. (source annedale.com)

(ST. BENEDICT, La.) — Not since the Great Mississippi Valley Flood of 1927 has the St. Joseph Abbey and Seminary College, which lay on a steep bluff above the Bogue Falaya River, flooded to the degree it did in March 11 of last year.

It was for this reason that they did not have flood insurance.

Ordained residents, students and staff alike were marooned on the second floors of campus buildings for many hours, with copious concerns that the tumultuous surge may rise more than it already had.

“I was grateful that we had second floors, for one thing,” Abbot Justin Brown, the overseer of the Benedictine order, said. “Some people were trapped on top of their cars, or various tables. But, we were able to get them all to a second floor (of one of the campus buildings), so we were safe.

“There was a certain sort of feeling, at least for a couple of hours, of being trapped,” Abbot Justin said. “And, I think what went through my mind, really, is that there are some situations where you can’t do anything about (the situation at hand). So, it really helps when you have faith in God, and that there is some sort of greater power looking after you.” 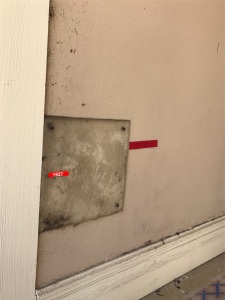 The approximate water levels of the St. Joseph Abbey’s flooding in 1927 (left tape), in comparison to that of last year(right tape).  (Source: Colin Rice)

Luckily, the cornered occupants were spared without injury. But, the property itself, along with some of the already relocated vehicles, had been bruised by nearly two feet of water.

The reconstruction effort is now underway, and will bring a new facility along with sheetrock replacement and updates to the other structures.

“Well, the recovery is taking over a year now to complete,” Abbot Justin said. “We’ve been able to reopen the seminary, which was done within two weeks after the flood. We have been able to also reopen several of the other operations at our Abbey.

“The bakery, with our Pennies for Bread charity, opened (in October) because we needed new equipment,” Abbot Justin continued. “We were also able to reopen the St. Joseph Woodworks, which is our casket operation. This took a couple of weeks because most of our machinery had to be cleaned. It took months to reopen our kitchen; we had a temporary trailer (to serve as our) kitchen. We were out of our dining room for a couple of weeks.

“We then had to bring in modular buildings to start the new school year,” Abbot Justin said, “which we will be using for probably a couple of years. Just a few months ago, we started our major repairs on the dormitories, and the seminary, our main monastery building — that should be completed by the beginning of May.”

The Abbey has some additional repairs which are in preliminary planning stages.

“We still have to repair our Christian Life (retreat) Center, the auditorium and our two other seminary buildings,” Abbot Justin said.

According to Abbot Justin, a new library is also on the construction docket.

In August, there was yet another scare for the divine district’s dwellers.

“We were keeping a close eye on the Bogue Falaya River,” Abbot Justin said. “We monitored it for a while until we were really sure that it it was not going to flood. Our sympathy (towards those who were affected) came out with prayers.”

Though it is fortunate that the Abbey has been granted FEMA aid for educational and secular endeavors, capital is still essential to further complete the reassembly, as the property was not zoned for mandatory flood insurance. 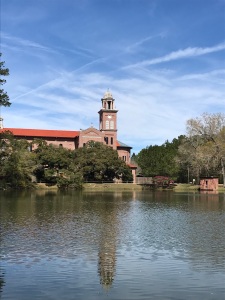 The Abbey not only rests aside the banks of the Bogue Falaya river, but also lies along a very tranquil pond dug for meditative purposes. (Source: Colin Rice)

“We are, and have been, in the process of applying for various grants,” Abbot Justin said. “We are continuing to reach out to some foundations. We are also trying to continue to make known to the public about the need that we do have to continue to raise money for the flood (reconstruction), and we are still hoping and anticipating for more FEMA money to come in, as we have only received a small percentage of what is earmarked to be sent to help us.”

“We have been very grateful for the funds from the many people who have supported the Abbey to help us get through this disaster,” Abbot Justin said. “To date, we have raised $5.5 million, which is an enormous amount of money which we have never raised before.”

“We feel, too, that with a lot of prayer and a lot of perseverance, that we will get through this difficult challenge in our history,” Abbot Justin said.

A video of the flooding, compiled by Colin Rice using his photography, along with some additional photography courtesy of the Abbey, can be seen below:

Wish to support the continuation of repairs and the construction of the new library at the Abbey? Please click here.

Colin is a junior student who serves as the St. Paul's columnist at the Times-Picayune for the 2017-2018 school year. At The Paper Wolf, he serves as the News Editor. Primarily, Colin focuses on the school's clubs and happenings, as well as local news. If you wish to contact him in reply to an editorial, send photos or press releases, or just to say hello, please send an E-mail to colin.rice.2019@stpauls.com. View all posts by Colin Rice →