(NEW ORLEANS, La.) — St. Paul’s School’s VEX Robotics Team, known commonly as the RoboWolves, traveled to Holy Cross School in New Orleans on March 4, 2017, where they competed against several other high schools in statewide competition. After emerging victorious, the Wolves were crowned state champions, and were later ranked both nationally and internationally for their robotic prowess.

“What makes me most proud of the team is our work ethic,” RoboWolves captain Blake Bollinger said. “The hard work we continuously put in led to our state championship victory, and caused us to become internationally ranked.” 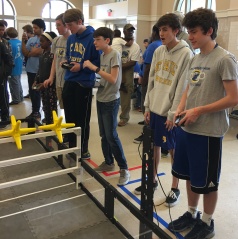 “Being internationally ranked is a great honor for our team,” Bollinger said. “We have put so much work into our robot, and finally seeing all our efforts flourish is a feeling like no other.”

The RoboWolves are also ranked seventh in the United States. Besides earning the prestigious title of “state champions,” the RoboWolves also received the Excellence Award and Best Programming Skills Award while participating in the state tournament at Holy Cross. However, victory did not come easy for the Wolves, and various obstacles had to be overcome to achieve success.

“Competing in state competition presented many challenges for our team,” Bollinger said. “At the state tournament, there were many more teams than we’re typically used to at a regular competition. At a normal competition, we try to scout teams to learn their strengths and weakness. However, with the increased number of teams, this proved difficult. It was also hard to keep track of our allies and opponents.” 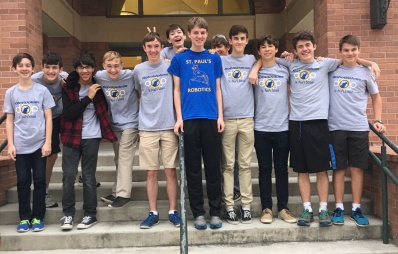 The RoboWolves distinguish themselves by working together and maintaining team chemistry. Comprised entirely of freshmen and sophomores, the team shares common interests, desires, and goals. According to Bollinger, the RoboWolves separate themselves from all other VEX robotics teams because of their active teamwork and cooperation.

“Everyone on the team plays an equal role,” Bollinger said. “Everyone contributes to the design of the robot, everyone helps prepare the robot before matches, and everyone is assigned with a specific aspect of maintaining the robot. We all want to see our robot succeed, and we’re willing to do whatever it takes to win.”

These members practice weekly, and dedicate themselves completely to the success of the club. Work is strategically divided among RoboWolves members and carried out with great care and diligence.

“We hold practice every Wednesday after school,” Bollinger said. “We all work as hard as we can during that time, and we often have a lot of work left over. So, many of the team members take their work home and work throughout the week.”

Currently, the RoboWolves are preparing for the VEX Robotics World Championship in Louisville, Kentucky, on April 19-25, 2017. Now entering its 10th year, VEX Worlds gathers the top 1,400 student-led robotics teams from around the world, where they compete in competitive robotic games.

“From here, the team has a lot of work to do if we want to place well at Worlds,” Bollinger said. “Overall, we hope to place in the top 10 at the competition, and we’re currently making several improvements to our robot in hopes of reaching this goal.”

Yet, no matter the enormity of the task, the RoboWolves remain optimistic. In the years to come, the club plans to surpass its successes of the 2016-2017 school year, and continue to triumph in VEX robotic competitions.

“As for next year,” Bollinger said, “I hope we can have as much success, if not more, than we did this year.”