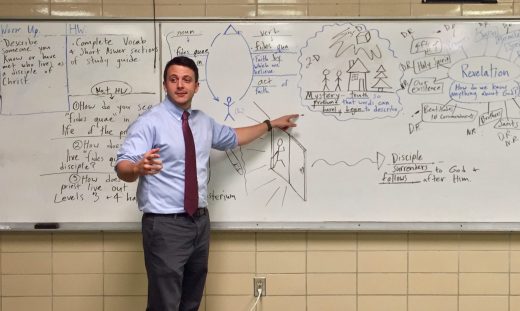 Sturgill lectures a group of students during one of his freshman religion classes (Photo: Ben Davidson)

Religion teacher Chris Sturgill came down to Louisiana for a job offer. What he found was a community, a culture, and a brotherhood.

As a fresh Franciscan University graduate, Christopher Sturgill was looking for a job like any other millennial would be. He had received teaching offers back home in West Virginia and at St. Paul’s School. He decided to take the offer at SPS because he had gone to college with a few SPS graduates and was “intrigued by the environment and the sense of brotherhood.” The final thing that pushed him to SPS was that he wanted to experience a new culture, one of deep and powerful Catholicism, but also the deep history of New Orleans. Sturgill was “ready for an adventure and a new page in his life.”

Sturgill has started his second of hopefully many years of teaching freshman religion class, and says he has greatly enjoyed it. His class is “informative and fun,” said freshman Sam Davidson in regards to how he felt about Sturgill’s teaching style.

When Sturgill is not teaching religion, he is busy in the wrestling gym training the up-and-coming wrestlers from the prefreshmen level. During his free time when he’s not coaching wrestling, Sturgill says that likes to hang out with friends and “ponder philosophy.”

Sturgill says that if he could spend the day with a celebrity, he would spend the day with Joseph from 21 Pilots, which should not come as a surprise to any of his students due to the amount of 21 Pilots that he plays in class. His favorite color is green, which is fortunate considering that he now lives in Louisiana. And when asked for his opinion on the Floyd Mayweather and Conor McGregor fight, he responded with, “I think Floyd Mayweather will win because it is boxing; but if was MMA, Conor McGregor would win.” His prediction came true, which gives him even more credit as a modern-day religion teacher.