Buras smiles after receiving countless cheers of approval from an astonished crowd during his performance at Lafitte Street Station in Mandeville. (Photo by Chase Whittington)

(MANDEVILLE, La.) Today’s ever-evolving hip-hop/rap genre is characterized by several passionate, young artists who possess a devout love for music and an innovative mindset. Many of these developing artists publish their creative works on SoundCloud, an online music-streaming platform designed for users to record, promote, upload, and share their own originally-created sounds. St. Paul’s School senior Beau Buras, who has been hard at work self-producing his own hip-hop/rap beats, successfully ranks among these individuals.

“More than anything else, I want people to love music like I do,” Buras said. “Nothing is better than bumping other people’s music and finding music that I love listening to. With my music, I want people to have that same experience. That’s my motivation to keep moving forward and getting better.”

Buras poses next to his computer, which plays his beats electronically, during his performance at Lafitte Street Station. (Photo by Chase Whittington)

Buras has already published numerous tracks on SoundCloud, all of which have received multiple reposts and favorites from other SoundCloud users. These self-produced tracks, which consist of hip-hop/rap beats created by Buras himself, feature other artists lyrically. Although Buras has occasionally provided his own lyrical verses throughout his music, he prefers producing the songs.

Recently, the student producer has been busy working on his debut EP, which he plans to release to the public promptly. This project will mark his first, official EP composed entirely of his own originally-created content. Buras has also featured his close friends, Mandeville High School seniors Connor Scallan and Ryan Cook, lyrically throughout the EP.

“Honestly, I’m feeling really confident about this project,” Buras said. “The overall sound is really good, and I’m impressed with myself. My friends are both insanely talented, and making music alongside them has been an awesome experience.”

Napolitano raps during his performance with Buras at Lafitte Street Station. (Photo by Chase Whittington)

“Kiefer wants to release an EP with me producing every song on it,” Buras said. “It’s been us two since the start, and we both love making music together. I think we’re a pretty good duo.” 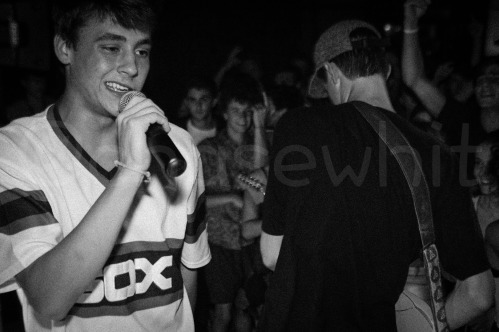 Napolitano raps over the sounds of Buras playing his guitar during their performance together at Lafitte Street Station. (Photo by Chase Whittington)

However, Buras is still learning. Since the beginning of his producing career, he believes that his overall sound has improved dramatically. Yet, he understands that there is always room for improvement. For Buras, every track produced is a learning experience, and every track completed marks an essential milestone in his developing producing career.

“Every single time I produce a track, I’m learning something new,” Buras said. “With time, I know that I can get so much better. My style isn’t even close to being sculpted yet, and I’m still finding it with each song that I make.”