You are here: Home » Revisions to the School Bathroom Policy Reportedly Being Discussed 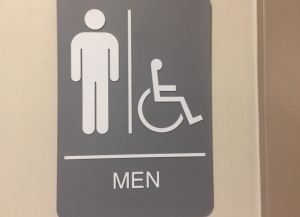 (COVINGTON, La.) Students at St. Paul’s School may soon receive a new bathroom policy, rumors suggest, something that has been long awaited by the entire student body of SPS.

“(The rumors) are true; this is something that was brought to the faculty advisory board,” Assistant Principal Joe Dickens confirmed. “Behind the scenes, Coach Sears and Mrs. Suzy (the attendance secretary) have hammered out something that makes a lot more sense.”

The existing policy forces students to stay after school and pick up trash to make up class time that they missed while they were in the bathroom. This consequence was used regardless of the reason that the student went to the bathroom. The new system being discussed uses a three-strike system. Students will no longer have to pick up trash for using the bathroom once. Now, students who accumulate three bathroom notes will have to explain why they are not using the time between classes and then, if necessary, will receive disciplinary action.

Football players and other athletes are overwhelmingly in favor of the new changes, as they are encouraged to drink a gallon of water a day, but are punished when they inevitably have to use the restroom.

The new policy is much more forgiving of the times when you just have to go, and instead focuses punishing the repeat offenders.

“I really like the new policy. Now I can hydrate and use the bathroom if I need to,” sophomore Scott Manifold said.

It is not yet clear as to when this new policy will take effect and start to be enforced. Students will be informed once a final decision has been made.