You are here: Home » The Bounce Back: Saints 2017 Season Review 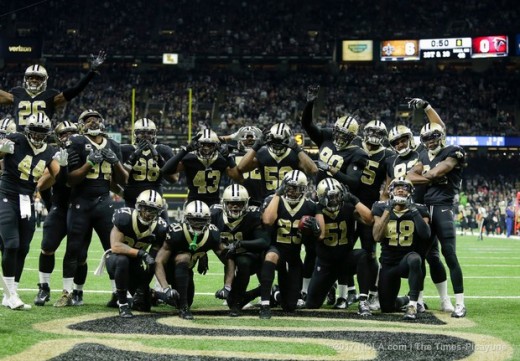 The Saints defense was closer and better than they have been since the 2009 season.
(Photo: Nola.com)

(NEW ORLEANS) For the past three years, New Orleans has been shrouded in the near shame of having one of the most mediocre teams in football. The Saints, having suffered through three consecutive 7-9 seasons, record-setting terrible defenses, and a Drew Brees at the top of his game caused Saints fans to have their hopes smashed by this second-rate team. These seasons were just plain hard to watch as the defense gave up very easy touchdowns, and the offense struggled to keep us in the game. However, following the 2017 NFL Draft, the Saints 2017 team looked to be much more complete than the 7-9 2016 team.

In 2016, the Saints looked like, and played like, a lost puppy. There were times when we flashed some ability to be great, but that was all for naught. Locker room problems coupled with lack of involvement by some players wreaked havoc on the Saints’ ability to be a contender in the NFC.

However, in 2017, that problem appeared to be gone with the wind. Boosted by young rookies Marshon Lattimore and Alvin Kamara, the team began to gel. Led by First Team, All-Pro Defensive End Cameron Jordan, rookies Lattimore, Marcus Williams, Alex Anzalone, and Trey Hendrickson, the Saints defense rose from the dead of the past three years and became one of the most potent in the NFL. Lattimore and Williams led all rookies in interceptions with five and four respectively. Although Anzalone was put on IR after a shoulder injury in the fourth game of the year against the Dolphins, which cut his season short, he looked promising as he recorded 16 tackles and one sack. Jordan had arguably the best season of his career, when he recorded 62 combined tackles, 13 sacks, 12 swatted passes, and one interception. He was undoubtedly the leader of this defense. 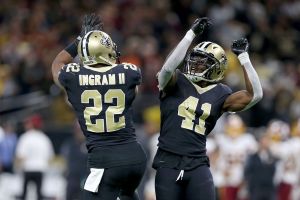 On offense, it was the best year since 2009, as rookie sensation and favorite for Rookie of the Year, Alvin Kamara, put up sensational numbers. Alongside former Heisman Trophy winner Mark Ingram, Kamara had over 700 rushing yards and 800 receiving yards along with 13 combined touchdowns. Ingram and Kamara were the first running back duo to each record 1,500 total yards since the NFL-AFL Merger. Sophomore Receiver Michael Thomas set the Saints’ franchise record for receptions and was the first receiver since Odell Beckham to record more than 1,200 yards in each of his first two seasons.

The Saints looked like a completely different team in 2017, with the most “swag” in the NFL. Led by rookies, this team could have gone all the way if it wasn’t for a lucky play in the final seconds of the NFC Divisional Playoff between the Saints and the Minnesota Vikings. The play consisted of a 61-yard touchdown pass to Stefon Diggs, and a missed tackle by Marcus Williams. Now, before I go on, please leave Williams alone. If you have the time or patience to take a look at Williams’ college highlights, you would be shocked to find that the way Williams went to tackle Diggs worked so well at Utah.

Thinking to next season, the Saints have much hope to believe a Super Bowl run could be in the works for 2018. However, the biggest questions for the Saints still remain. Is Drew Brees too old for another contract extension? Is Kenny Vaccaro worth re-signing with the young tandem of Vonn Bell and Marcus Williams occupying the safety slots?

This Saints season has been a successful one, one filled with an 8-game win streak and a NFC South win. Very talented rookies and a very good mix of talented veterans are what made this team great. What was different about this Saints squad, and the reason behind their victories, was how close the Saints were as a team. We can only hope next year’s team is just as close and just as successful.