You are here: Home » Jackson Cretin Takes a Bite out of The Big Apple 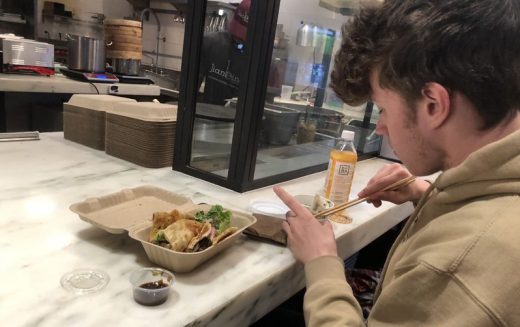 Our Journalism teacher, Mrs. Simoneaux, happened to catch me enjoying my favorite meal of the week. (Photo: Christi Simoneaux)

(NEW YORK) The Paper Wolf’s journalism team recently took a trip New York City to participate in the Columbia Scholastic Press Association Spring Convention. While we took in quality information over the span of three days, I took the chance to experience the enormous food culture present in New York. In this article I am going to take you step-by-step, bite-by-bite, through some of the delicious food New York City has to offer.

The Milano Market is a deli/market/bakery that offers hot and cold sandwiches, as well as salads. I ordered the a chipotle turkey sandwich that came with arugula, havarti, turkey, tomatoes, and a chipotle spread and was toasted. The chipotle was fantastic, adding a deep flavorful spice that wasn’t all burn. The creamy havarti was melted on top, encompassing all of the fresh sliced turkey. But the best part of the sandwich  was the bread, as they make all of their bread in-house. It was a great mixture of a crispy outside and soft thick inside. The only bad thing I have to say is that the ordering process was crowded and cluttered, but the line moved fast. Rating: 9 out of 10.

Shake Shack is to the northeast as Five Guys Burgers and Fries is to the south. They are known for their thin griddle burgers and soft, buttered buns. I was a little skeptical at first, thinking it was going to be like any other burger, but I was happily proved wrong. I ordered the SmokeShack burger which is a cheeseburger topped with applewood smoked bacon, cherry peppers and their signature ShackSauce. After a surprisingly short wait, we got our burgers. The bun was ridiculously light and fluffy, which paired perfectly with thick cut bacon. I had never heard of a cherry pepper before this, but these peppers added an interesting and vinegary taste — similar to pickles — to the burger. While the burger was very tasty, it wasn’t enough to put it in the top tier of burger joints. Rating: 7.5 out of 10.

Junzi Kitchen is a modern take on Northern Chinese food. They aimed at taking old traditions and adding modern ingredients and styles. They specialize in Bings (a wheat wrap) and noodle bowls. I went with the bowl. It was a go-down-the-line-and-pick-your-ingredients style restaurant, and it had a plethora of interesting fixings. I loaded my bowl with Knife noodles (thick, fettuccine-like wheat noodles), jaja sauce (a salty, savory soybean sauce), seared chicken thigh (chicken marinated in ginger, rice wine and other Asian spices), Pickled peppers, bean sprouts, kale (bad choice on my part as the kale added a very thick bitter taste), cucumber, chili oil, and soy sauce. The fresh, cold vegetables with the warm chicken and noodles was very refreshing. Deep, spicy and savory flavors were added from the jaja sauce and chili oil. I went in this restaurant knowing nothing about this food, and came out very full and satisfied. The dedication to their craft is very impressive. Rating: 10 out of 10. 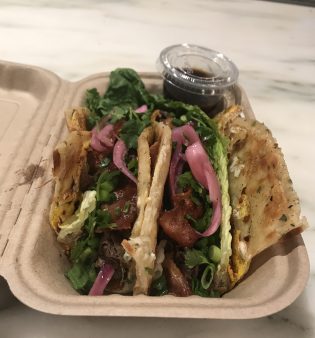 The Jidan Bing loaded down with flavored beef, bacon, and crisp vegetables, all inside a flaky scallion pancake. (Photo: Jackson Cretin)

Jianbing Company was easily my favorite place we went to all week. It was located in the Gotham West Market, which was basically a food court on gourmet crack. It was a beautiful building with multiple delicious-looking restaurants serving everything from pizza to ramen bowls to fancy, savory and sweet waffles. Yet, I was sucked into Jianbing Company due to the mesmerizing way they make their food. They classify themselves as Shanghai-inspired street food, something I have never heard before. I ordered something called the Jidan Bing. Similar to a taco, it consists of a flaky, doughy crepe with an excellent crisp to it, which is stuffed with hoisin-lime beef, bacon, romaine lettuce, scallions, cilantro, pickled red onions, an Asian house sauce and chili sauce. Watching them make my meal was making my mouth water. I took a bite out of my flaky, crispy bing and the spicy beef, with a subtle cold crisp from the romaine, lit up my taste buds. The pickled onions with the lime beef made for an excellent tangy combination. Every bite was was better than the last. I was very pleased on ending my trip on a good note with this meal. Rating: 10+ out of 10.

New York was filled with delicious food that can’t be found anywhere else; my only regret is that I didn’t get to explore more of their culinary scene. Even their street food was amazing. I highly suggest going to New York if you have a chance because the culture and passion surrounding their food is unmatched.