(COVINGTON, La.) — The award-winning Louisiana Philharmonic Orchestra took St. Paul’s by storm with a stroke of the cello and plucking of the bass. The LPO performs several concerts throughout the year across Louisiana, featuring classical pieces by composers such as Beethoven and Stravinsky as well as some popular movie scores from the likes of Pirates of the Caribbean and other works of pop culture. 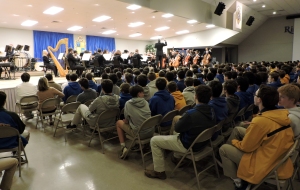 St. Paul’s was honored to accept the LPO, and the entire school as well as many Junior High Schools in the area enjoyed the show. The performance included a comical educational act that taught the students and staff the different elements in an orchestra and how composers put these elements together. Although, the act targeted younger children, but  still taught the students of St. Paul’s that an orchestra can sing as well as play. They taught the students and staff the importance of having rhythm and a melody. As the LPO explained the bits and pieces, the pieces gradually advanced and became more compelling.

The LPO explains the elements that make up an orchestra. (Photo Credit – Karen Hebert)

The LPO opened with Klaus Badelt’s Pirates of the Caribbean. After which they began Form the New World. The LPO explained to the students that you can uses the same tune over and over again and it will not sound the same by changing the pitch, melody, and volume. They exhibited this by playing Simple Gifts. The LPO included the students by having them sing with the orchestra playing Ode to Joy. Right after a wonderful performance of Ode to Joy they went into Johann Sebastian Bach’s Little Fugue in G minor. Next they wanted to show how composers used the instruments to mimic the sounds of a storm by performing Ludwig Van Beethoven Allegro’s Storm. The orchestra went on to preform Igor Stravinsky’s The Firebird. They then concluded with Jim Papoulis’s Oye that consisted of singing and dancing from the actors and some students.

Students and faculty left the Briggs Assembly Center wanting more and with a curiosity of the music and the elements that make a music piece up. The Louisiana Philharmonic Orchestra can be seen across Louisiana. Go to http://www.lpomusic.com for more information on where and when they will be playing and experience the wonderful art of music.

Christian Kramer, a sophomore at St. Paul's School and a staff writer for the Paper Wolf. He has been a varsity swimmer for St. Paul's since 2016 and is a registered lifeguard. His favorite restaurant is Sal & Judy’s. Email christian.kramer.2021@stpauls.com. Phone Number (985) 590-0664. View all posts by Christian Kramer →