You are here: Home » Angola: The Most Impressive Place I Hope to Never See Again

The day started off with the most tedious task of the annual St. Paul’s junior class trip, sitting on a bus for two and a half hours. The trip led us up I-10, past Baton Rouge, and into Louisiana back country.

The time had finally arrived when we saw that we were at our destination, the Louisiana State Penitentiary in Angola, La. Before entering the prison, we stopped at the gift shop and museum. While other students were busy buying commemorative t-shirts and looking at the museum’s vast collection, I was eager to get on with the trip. The moment of truth came when we entered back into the bus where the real trip would start. A plainly clothed officer came on the bus with a large brown paper bag, into which we would put our cell phones. It was HIGHLY stressed that we do not bring our cellphones in, as it is a federal crime. After a head-count of people on the bus, we rode through the gates and entered Angola.

The first thing you think when you see the inside of Angola is, “Wow, this place is huge.” Eighteen thousand acres huge, to be exact. As we drove along the road to our first stop, the vast fields where the inmates grow and harvest crops year round became visible. 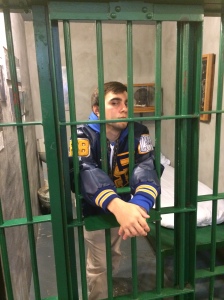 This was a picture taken of me in the Angola Museum jail cell.
(Photo by Josh Nunez)

Our first stop was Cell Block A, where class A and B trusties are held. Class A and B trusty is the highest level of trust given to a prisoner. Most of the men had been at Angola for over 10 years and were at least over 30 years old. Next, we were directed to the chapel. There was something unsettling about walking through the cell block. Even though there was staff all around us, and these men were virtually harmless, there was an unspoken tension in the air. A tension that a student would have to tolerate in order to not look weak.

When we had reached the chapel, there was a man standing by the altar. Though I don’t remember his name, he has been in Angola for over 23 years and appeared to be in his mid-50’s. Accused of second degree murder, he had been given a life sentence. He will never see outside of Angola again. He talked to us about how easy it is to end up where he is, something hard for us to initially believe, explaining to us that he wasn’t the typical kind of prisoner. He was raised a “good kid,” had loving parents that were always there for him, graduated high school, went to college, and acquired two degrees. This is what made some of us a little more honest. How could this man who seemed to have a normal life end up in the biggest maximum security prison in the United States? He said, all it takes is one stupid mistake.

After answering a few of our questions, he boldly said, “I better not see any of you back here ever again. And if I do, I will not speak to you.”

A little more tense now than when we arrived, we walked back out of the cell block to the bus. We continued to drive around to see the sights. Our tour guide pointed out different things around the grounds: officer quarters, old cell blocks, and even cell block J where the notorious Torrence Hatch (aka Lil Boosie) is incarcerated.

The time had finally come to see the one thing I had been most anxious to witness, the execution room. We walked into the cell block and a few other spare rooms. After being crowded into a small conference room, we got a little surprise. The warden, Warden Burl Cain, came to talk to us. He said that he had been meaning to meet the St. Paul’s students who had been coming to Angola for quite some time. Apparently we were the first group of students to ever meet him. After he talked for a while and answered a few questions (most about death row and the death penalty), he asked us, “Are y’all going down death row?” A few of us responded “no” since going down death row was not a part of our tour. The Warden, being the generous man that he is, gave us permission to actually go down one of the blocks of death row. This is where the trip got exciting.

After he said his goodbyes, we finally went into the execution room, the real reason we had gone into the building. Half of us piled into a space that seemed smaller than half the size of an average classroom. I went and stood right next to the table where inmates would be strapped down. There was a deathly silence in the room. On the side, there were two rooms with see-through glass. One room for the press, and one room for the victim’s family. On the other side, by the head of the table, was a smaller room with a one-way mirror. This is where the executioner would be. Our tour guide explained the process by which the prisoner would be put to death using a combination of three drugs. There was something chilling about the fact that real people — real men with families, friends, thoughts and dreams  — had died here, in this exact place, on this exact table that I am touching.

After she explained the process, we all did what St. Paul’s students do best, we prayed. We prayed for the men who had been put to rest here. For their families and friends. And the hope that they were with God in the afterlife. There was something really powerful about that moment that words wouldn’t do justice. It was a settling peace in a place that wasn’t so peaceful.

The next stop along the tour was the cafeteria. I was particularity worried about this one. We had not eaten all day, and most of us were very hungry. And while it wasn’t a 5-star restaurant, the food actually satisfied my hunger. Lunch consisted of fried catfish, macaroni salad, corn, cornbread, and two cookies. All washed down with some orange kool-aid. Even though the macaroni salad was not the most appetizing, everything else was not bad at all. After eating and pretending like we were hardened inmates, we got a tour of a trusty bunk room.

Next, we walked out of the cell block, went down the walkway, and stood in front of the gates of death row. Ironically, the building was one of the nicest at Angola, having been renovated quite recently. Our tour guide opened the double gates, and we walked through to the front door of the building. Again, ironically, it seemed like a nice office building, fully furnished with an appealing look. After walking through the front foyer, you see the real death row. We lined up on the side of the command center in the middle of the building, awaiting instruction from our tour guide. We were told to walk down to the end of the cells, make a loop and come back around.

The doors opened, and we filed through.

You could tell that everyone was nervous. While some showed it in their faces and body motions, others kept it within to try and show the inmates that they weren’t afraid. But they were, and the inmates probably knew it, too. It was as scary as I thought it would be. It was fascinating, but not something I ever want to relive. Most of the men just went about their business, playing cards, reading, and even sleeping. A few where up and about though, standing in their cells just starring at us. And while a few of them just looked like normal people, another few, well…if looks could kill.

Once everyone was out, there was a collective sigh of relief. Now, I can check “walked down death row” off of my bucket list.

We then loaded back on the bus, collected our cell phones at the guard gate, and drove out of the “gated community.” Finally back on the free side of the world, most everyone fell asleep on the bus on the way back to St. Paul’s. While everyone slept, I couldn’t help but think about the men in there. Men that will never see outside of that prison for the rest of their lives. And while we mindlessly go about our lives and forget about the trip shortly after we leave, these men will continue to be incarcerated. And while we live freely and take our lives for granted, those men will be thinking about the freedom that, most likely, none of them will ever have again.