You are here: Home » Deadliest Teacher: The Matrix – Final Chapter 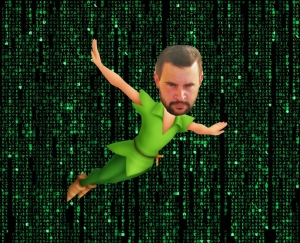 Last time on Deadliest Teacher: the Matrix, Mr. Baumgartner had defeated Mr. Carambat, Mrs. Case, Mrs. Jordan, and Coach Moser in a sudden-death elimination race around the track. Three teachers remained in the competition, but by the end of the day there would only be one.

After a few minutes of searching, Mr. Baumgartner found Coach Ancar in the LaSalle Hall courtyard. Coach Ancar had spent his time in the competition turning the courtyard into a zen garden.

“Hello Coach Ancar. I am here to fight you.”

“Hello Mr. Baumgartner. I will only fight you if you meditate with me first.”

“Very well,” said Mr. Baumgartner, as he sat down on a nearby boulder and closed his eyes.

Without delay, Coach Ancar ran towards Mr. Baumgartner. In one swift kick, Coach Ancar had sent Mr. Baumgartner flying off the boulder. Realizing what had just happened, Mr. Baumgartner managed to hit the wall of the courtyard feet-first, allowing him to push off the wall back towards Coach Ancar to send him flying this time. The two continued launching each other back and forth for quite some time, until another teacher came along.

“You two shouldn’t be fighting one another. It’s not very Lasallian,” said Mrs. Wiggins.

“Well if we should be more Lasallian, why don’t we make this an inclusive community, and fight you, too!” said Coach Ancar.

As Coach Ancar let go of Mr. Baumgartner, Mrs. Wiggins reached into her pocket and pulled out a whistle. She blew the whistle, and the skies opened up, and a group of boys appeared. They were all of the students of Saint Paul’s Secondary School that had benefited from her years of selling candy at lunch. The boys caught Mr. Baumgartner and threw him back at Coach Ancar. The two teachers hit each other so hard that they were sent flying away from the impact, flying so far, that they landed in the middle of 11th Ave. As we all know, leaving campus boundaries is an instant disqualification, meaning that Mrs. Wiggins is this year’s Deadliest Teacher!