You are here: Home » NBA 2K15 Gives Basketball Fans Hope For The Future

I was hoping to write a glowing review for NBA 2K15, the newest addition to a brilliant line of video games developed by 2K and Visual Concepts. The game released on Oct. 7 for PS4, Xbox One, PC, PS3, and Xbox 360 received lots of hype building towards its release, leading potential buyers to believe that this game was more than just a $60 roster update.

Problem is, if you haven’t converted to a next-generation console yet, that’s exactly what you’re buying…a roster update.

I made the fatal flaw of purchasing this game for the PlayStation 3, unaware of the fact that the heavily-hyped new additions to the game would not be found on that console. The graphics have slightly improved, LeBron James is back on the Cavaliers, and the 2K Heroes mode (more on that later) has transferred to current-generation consoles, but everything else about this game is largely the same.

The main menu is nearly identical to that of last year’s addition to the franchise, NBA 2K14, as is the general feel of the gameplay, the myCareer mode, and The Association mode — the now-outdated “franchise” mode where the player takes control of an NBA team and guides them to a championship. MyTeam mode, the online mode that lets you use virtual currency to buy players and beat other teams, and NBA Blacktop mode, 2K’s surprisingly entertaining attempt to bring “streetball” to the digital world, are slightly updated, but not extensively enough to elucidate improvement.

There were a few changes, however. 2K Heroes mode makes its debut. Inconsistent online servers have made it difficult to use, as a connection is required to play the mode. But on the rare occasion that it works, it’s enjoyable. Eight current and former NBA legends — including LeBron James, James Worthy, and Shaquille O’Neal — sponsor various charities, and as players win with their teams, money is raised for the charities. Players enjoy this because they have the opportunity to play with a group of legends playing together. For example, Shaq’s team of himself, “Pistol” Pete Maravich, “Dr. J.” Julius Erving, Michael Jordan, and Karl Malone raise money for The Boys and Girls Club of America.

Also new to all systems is the shot meter. This meter, found underneath the active player on offense, helps the player to gauge when to release the ball in their shot. While this may lead to some speculative shots — using New Orleans Pelicans’ star power forward Anthony Davis, I made a long three-pointer from the sideline in practice mode — it makes the game a little bit more interesting. 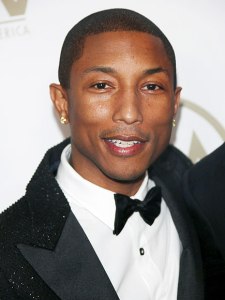 Pharrell Williams, curator of the soundtrack in this year’s game, has had a late-career resurgence, attaining much of his success around age 40. (Photo Credit: People Magazine)

The only other new thing about the game for PS3 and Xbox 360, however, is the soundtrack. While the fact that writing about this being a change should signify the lack of current-gen growth altogether, this year’s soundtrack is pretty solid. Curated by Grammy-award winner Pharrell Williams, it features tracks from bands and artists like No Doubt, A Tribe Called Quest, The Red Hot Chili Peppers, Missy Elliot, and Pharrell himself. While at some points this list of songs feels like an oversaturation of Williams’s songs — he foregoes his popular songs like “Get Lucky” and “Happy” for lesser known tunes like “Hunter” and “How Does It Feel?” — the widely-praised producer put together an eclectic list of songs that boost the feel of the game.

Due to the lack of changes overall between 2K14 and 2K15, I can’t justify recommending that you waste your money on this game if you already have the former. However, this game is a solid buy on current-gen if you haven’t purchased one in a while or if you wait for the price to drop to a reasonable amount of money.

With all of this said, if you have a next-gen console, this game is a must-buy.

Sure, the internet servers have been shoddy at best, but that doesn’t really matter. This version of the game is superb. The graphics are as phenomenal as any video game on the market. The new myLeague mode debuts to the series this year, allowing for maximum customization and making the NBA your “personal sandbox.” MyGM mode returns to next-gen this year, and while it hasn’t improved much from last year, the mode in conjunction with myLeague blow the old Association mode out of the water.

The myCareer mode underwent a bit of an overhaul, as well. On new consoles, rather than going through the NBA Draft process like previous offerings of the game, the player starts as an undrafted free agent working to rise through the ranks and become the next Kevin Durant or LeBron James. Expanded role-playing opportunities and use of actual voices and acting from NBA players (Markieff Morris voices himself and acts as a mentor if you wind up on the Phoenix Suns) separate this mode from any other “Story Mode” ever released in a sports game.

Overall, the current-gen version of this game gets a 5/10. It’s fun to play and with a sleeker design and new shot meter, the gameplay is slightly improved, but overall, this game doesn’t offer enough change to justify the cost. If $60 dollars isn’t a lot for you, or if you haven’t had an NBA game in a few years, then go for it. Otherwise, wait for the price to drop and get it pre-owned from GameStop.

The next-gen version gets a 9.25/10. Simply put, this game is fantastic and lives up to the hype. The online servers have been poor early on, but 2K usually fixes these problems sooner rather than later. The collection of new modes, combined with the incredible graphics, improvements to the current modes, and an overall inclusive feel make this a quintessential piece to your sports game collection.

You walk with him. You hear him taking trombone solos or singing at Mass. You can catch him as John the Baptist in Godspell. Now you can read his thoughts as he exercises his rights to life, liberty, and the pursuit of happiness. View all posts by Casey Fitzmaurice →