You are here: Home » My Place Amidst Rebel History

(OXFORD, Miss.) – The weekend of Oct. 4, 2014, will live in Ole Miss lore for years to come. On that weekend, the 11th ranked Rebels beat number 1 ranked Alabama Crimson Tide. If that wasn’t enough excitement, ESPN’s “College GameDay” made its first stop at the Grove on the Ole Miss campus with Guest Picker, Katy Perry. The guest picker is a celebrity who is usually connected to the school where College GameDay is broadcasting, although Perry is not, who forecasts the winner of the game at the end of the show.

In a hard-fought game that ended on the last drive, the students stormed the field, tore down both goalposts, and carried them to the Grove, then to the Square, and pieces eventually ended up in students’ apartments. 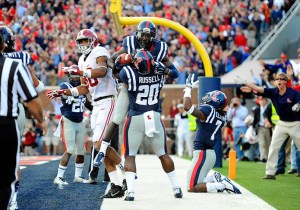 As an avid sports enthusiast and Rebel hopeful, I attended the game and witnessed all these events firsthand. Once arriving in the Grove, there was barely room to move near the tents, with over 100,000 fans tailgating on and around the 10 acres that consist of the Grove.

The game was an emotional rollercoaster from the first kickoff. To start the game, Ole Miss returned the opening kickoff into Alabama territory and had three very good returns that game. The atmosphere throughout the game was like being at a National Championship game, and you felt like magical things were going to happen, even though many of the experts picked Alabama to win.

On Alabama’s last drive, Ole Miss picked it off in the endzone, which sealed the win for the Rebels. After the Rebels kneeled the ball, fans from every inch of Vaught-Hemingway Stadium started running onto the field. I was one of the first people on the field and could see the unsuppressed joy on the faces of fans, players, and coaches around me.

Once students rushed the field, they started climbing on the goalpost located in front of the student section. In the background, fans were hugging and screaming the Ole Miss cheer: Hotty Toddy Gosh Almighty Who the Hell Are We–Hey! Flim Flam, Bim Bam, Ole Miss, By Damn. 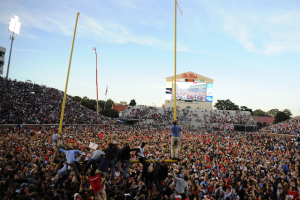 Ole Miss fans storm the field after the Rebels’ dramatic win over the Alabama Crimson Tide. This photo shows fans in the process of tearing down the first goalpost. (Photo Credit: CBS Sports)

After jumping onto the field, the only security personnel that could be seen were surrounding Hugh Freeze, Ole Miss head coach. The goal post was quickly torn down, and the students rushed to the other side of the field and tore down the other one.

By the end of the night, after being carried for over a mile, with a few stops along the way, the goal posts ended up being cut into smaller pieces for the students to cherish forever. They will cherish knowing that they just witnessed the greatest game Ole Miss has ever played. For me personally, being a part of this historical moment makes me even more excited about going to Ole Miss next year.