You are here: Home » Victim Turns Car Crash into Learning Experience for Others

With the assistance of her parents, Ashlee Stokes tells the story of how a drunk driver struck her car and left her paralyzed in 2008, when she was just 15 years old with a driver’s permit. (photo by Jack Dubreuil)

(COVINGTON, La.) — At a recent assembly, St.Paul’s had guest speakers come talk to the SPS student body about the dangers of drinking, texting, and not being buckled while driving.

The presentation for the students was not like any other. Usually, these types of presentations go in one ear and out the other. But, most students have reported that this one really hit home to them the because the accident wasn’t the the girl’s fault. It was someone else’s mistake that caused this girl to lose her ability to talk, walk, cheer, go to college, and has forced her to start her life in a completely new way.

Sophomore Schoen Jones said, “I was scared when I (previously) heard Ashlee’s story. Then when I heard she was coming to speak to us, I was happy to see that she had the courage to speak to all of these students.”

At the beginning of the talk, Officer Dwight talked about the dangers of not being smart while driving. Some examples he gave of potential consequences included causing someone’s life to change, getting put in jail for numerous years, death, not being able to go to the college or school of one’s choice, and ruining a family’s life.

Then Officer Dwight introduced accident victim Ashlee Stokes and her family, saying, “Most people’s heroes are famous people, but my hero is Ashlee.” 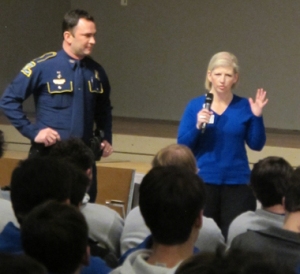 Susan Titman, managing nurse of the St. Tammany Hospital ICU, (right) discusses the difficulty of repairing brain damage from drivers who do not use seat belts. Also pictured is Officer Dustin Dwight. (photo by Jack Dubreuil)

Ashlee’s father David Stokes then spoke to the student body, and he warned the students that one careless mistake can cause someone their life, just because of wanting to look cool or try something out for the first time. Then he started going into detail about what had happened on that wretched day.

According to David Stokes, the whole family was at a crawfish boil, then Ashlee and her friend went out to get the ice cream for everyone. She was going down a road with no one on it when all of a sudden a speeding, reckless, and drunk driver clipped Ashlee from the side. Ashlee’s friend was also injured, but not as badly as Ashlee, who was in the hospital recovering for seven months.

Ashlee then explained that when she was laying in the hospital bed, she told her dad that she wanted to use her story to reach out to teenage kids about how one dumb mistake can cause a person their dreams, hopes, life, and happiness.

“Today, Ashlee is able to talk, but her speech is impaired. She is partially paralyzed but can walk with assistance and is able to communicate with her supporters online,” David Stokes said.

Most students were inspired by Ashlee’s story.

“The presentation was a life changing experience, because she turned a bad thing into a learning experience for other kids,” sophomore Tyler Petro said.

Jordan Kliebert has been apart of thepaperwolf staff for three years, likes to talk about sports, is in 12th grade, intern for ESPN radio NOLA, and is looking forward to the year. Contact him at Jordan.Kliebert.2017@stpauls.com or Jdkliebert@gmail.com View all posts by Jordan Kliebert →