You are here: Home » Ultimate Frisbee Team Flying into their Spring Season 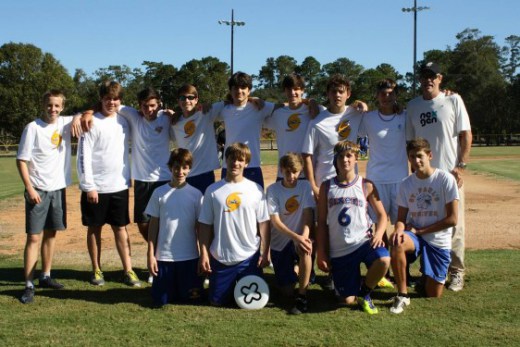 (COVINGTON,LA) — Each year many St. Paul’s sports and clubs have great success, but receive very little publicity. The Ultimate Frisbee team is one of those teams.

Started in 2008 and coached by Mark Richards, the Dire Wolves, as the team is called, is led by returning captain Joe Tanner. The team plays in both a fall and spring season and is currently starting on their spring season. Last year, they finished second in the state tournament and have high expectations for this spring season, as well.

Many people have heard of the Ultimate Frisbee team, but have never seen a game. Senior team member Connor Rees describes Ultimate play for newbie fans.

“There are fourteen people on the field at a time, seven per team. The basic rules are you can not run when you have the disc, and you move the disc down the field by passing until someone catches it in the end zone. Also if you drop the disc, it is a turnover where the disc lands. Each team has three handlers (people who are the best throwers), two poppers (midfield type players who make ten to twenty yard cuts) and two deep (same as poppers, but they are on the outside, and they make deeper cuts),” Rees said.

This year, St. Paul’s is athletically having a great year overall, with many sports winning state titles and competed well in their state playoffs and tournaments. Last year, the Frisbee team finished second in the state and has some stiff competition this year.

“It is going to be very difficult to defeat Catholic High and Baton Rouge Magnet because they are both great teams, but if we put the work on the pitch, and if big Richards (Coach Richards) screams at us loud enough, we will end the state tournament with flying colors,” Tanner said.

Players from others sports contribute to the Dire Wolves in many ways, such as many soccer players who cross over and help the frisbee team now that their season is over, including soccer goalkeeper Colin Hanley and championship game team co-captain Byron Morgan.

“Our biggest competitor has always been Catholic High, so at this point we are more focused as a team on beating them in state. With our new players such as Colin (Hanley) and Byron (Morgan) our athleticism is not a problem, it is just getting a flow for the game,” Rees said.

Students interested in attending matches can find the schedule here.

The Dire Wolves pose for a team photo after the Beowolf Tournament, which was held on St.Paul’s campus. (Photo Credit: http://www.stpauls.com)