Wolfie shows his support of Marvin the Duck during the football game.
(photo from Marvin Unchained Facebook page)

Many students wore #FREEMARVIN pins at school in support of the missing duck. (photo from the Marvin Unchained Facebook page)

(COVINGTON, La.) — The St. Paul’s Wolves defeated the Covington High Lions 33-9 on Oct. 9, 2015, with Corey Williamson leading the team to victory with three touchdowns. Casting a shadow on this year’s 80-year-old battle for the Brown Jug was the disappearance of Marvin, SPS’s beloved school duck, which added extra motivation for the win.

“The Wolves Power of Intention was so strong, it won them the game. Not because they wanted to beat CHS. It was because of Marvin. They played for Marvin,” wrote Catherine Pilie, the community member who donated Marvin the Duck to SPS, in a Facebook post on the page she created for Marvin.

Marvin the Duck officially went missing on Saturday, Oct. 3, 2015, when one of the retired brothers reported having heard loud squawking during the night. Due to the upcoming football matchup, St. Paul’s students began to suspect Covington High students of ducknapping the school’s pet. Multiple CHS students began posting tweets concerning the absence of the duck.

“They may have the jug but where’s the duck??” a CHS student tweeted.

“I believe the timely missing of Marvin the Duck is no coincidence,” sophomore Luc Hebert said. “He went missing the week of the Covington High game. I believe football players from Covington have stolen Marvin. There should be a full scale investigation to find who took Marvin. Justice needs to be served.”

One CHS football player began tweeting under the name of Marvin. (Twitter screenshot)

One CHS football player admitted to a Paper Wolf staff member that he created a twitter page revolving around Marvin. “So I’m just boolin at CHS #newhome,” tweeted the Marvin parody account.

“35 retweets and I’ll bring Marvin to school with me tomorrow,” another CHS student tweeted, with an additional picture of a duck, which police investigation later revealed was the student’s own duck and not Marvin.

“There was an investigation when students confessed to having Marvin on social media, however those turned out to be false confessions,” SPS Athletic Director Craig Ketelsen said.

Another popular theory among SPS students and staff is that Marvin went missing on his own free will.

“I think Marvin is just out for a little stroll,” Math teacher Susan Jordan said. “Maybe he met a fellow girl duck he likes. I think he will be back. He’s just off with Martina somewhere.”

Local reporter Kati Morse reported on #MarvinGate with a duck decoy during her coverage of the game. (WHNO TV20 Sports Twitter page)

The disappearance of Marvin allowed students from both sides of the rivalry to get creative during the football game, with SPS holding  #FREEMARVIN signs and CHS donning camo outfits with duck calls and decoys.  The SPS students could be heard chanting, “We want Marvin,” which was echoed by chants of “We ate Marvin” from CHS students.

The CHS hunters quickly turned into the hunted due to the relentless play of the Wolves after CHS scored the first touchdown. Corey Williamson, SPS’s star running back and player of the week candidate, carried the team to victory with three touchdowns and 191 yards on 26 carries. Not to be overshadowed by Williamson and Marvin, multiple Wolves proved themselves and gave fans a glimpse of what they can do. Quarterback Kenny Sears threw 24-of-34 passing for 261 yards and a touchdown, Chris Coyne made five catches for 77 yards, while Matt Meyers gained 75 yards and a touchdown,  and Brandon Barreiro’s 88-yard interception return in the last play of the game put the final nail in the coffin to make SPS 5-1.

According to Ketelsen, the official police investigation of Marvin’s disappearance has now been closed due to lack of evidence. Although SPS gets to keep the Brown Jug for another year, Marvin is still nowhere to be found, and suspected “fowl play” has refueled an 80-year-old rivalry between the two schools. 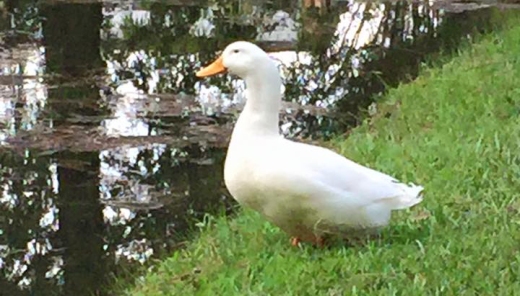 Marvin gazes out onto his new home at the beginning of the school year. His disappearance and whereabouts remain a mystery.
(photo from Marvin Unchained Facebook page)