(COVINGTON, La.) — The St. Paul’s School Jazz Band is expanding to include three separate bands during this school year to allow for more participation and better success in competition.

“The goal of Jazz Band is to play as much as possible for the community while being able to compete as well,” Jimmy Brinkman, the program’s director, said. “I want to make this year competitive for the Jazz Band, where there’s competition within the band as well as going to see where we stand against other schools.”

Brinkman’s three-fold plan of expansion includes the creation of the Big Band, Competition Big Band, and the Competition Jazz Combo. The Big Band will be open to all members of the Marching Wolves organization. The members of the Big Band will not have to audition to play, and membership could swell to as many as 35 members. St. Paul’s students not involved in the Marching Wolves may join if they set up an audition date with Brinkman.

“I figured, ‘Make more bands. Create more opportunities.’ Within creating those opportunities, create tiers,” Brinkman said. “I’m looking to create a Jazz program rather than just having a Jazz Band.”

Competition Big Band’s and Competitive Jazz Combo’s rosters will be formed based on audition results. Auditions, which take place on Wednesday, December 2, 2015, will not be judged by Brinkman, but rather will be judged by musicians not affiliated with the school. By this process, the best members will have their choice of band to be in, and the runners-up will take the remaining spots.

“I want it to be where I’m not choosing the band,” Brinkman said. “The band is chosen for me, because (the people involved are) the people that put in the time for the audition. If they can’t make it, and if they’re two points away (from making it), they’re going to work even harder next year for those two points.”

No matter the skill level of band, the program plans to increase the quality of product in the 2015-2016 school year.

“I like to think of the Jazz Band as a group where we can focus on working out the small things to make the bigger picture better,” Brinkman said. “There’s so many ways to read beyond what’s on the (sheet music). The people in jazz band want to push (limits) musically.”

Strategies to make each band better vary based on the skill of the musicians involved, but Brinkman anticipates this year’s jazz prowess to be aided by more than just individual practice. 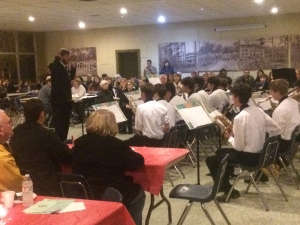 “I plan on bringing in a lot of different musicians to work in sectionals to take it to the next level,” Brinkman said. “The best way to learn to play music at a professional level is to watch professionals do it.”

The new organizational strategy employed by Brinkman is anticipated to allow the program to have additional longevity, and to allow future generations of Wolves to learn Jazz and its sibling genres.

“I want it to be a program that can be built upon, rather than every year we have to start from scratch,” Brinkman said. “I want it to be where if they weren’t in the competition band last year, they want to be in it the next year, so it turns into a competitive nature within the band that’s healthy and fair, because I’m not judging (auditions).”

Under the direction of Brinkman, the St. Paul’s Jazz Wolves have reached out into the community in previous years and expanded their reach through competitions and gigs in and around St. Tammany Parish, Southeastern University and Loyola University Jazz Festivals, and even at Disney World, where the Competition Big Band and Competition Jazz Combo will compete this year.

“We’re going to be playing for retirement homes again,” Brinkman said “(as well as) a couple of community events in Covington and St. Paul’s, like Celebrity Waiters and Luminarias.”

The Marching Wolves’ practice schedule moves to exclusively Tuesdays and Thursdays the week of Monday, Oct. 26, 2015, allowing the Jazz Band to begin rehearsals on Mondays and Wednesdays.

The World Around Us