(COVINGTON, La.) — The St. Paul’s Baseball Wolves have been increasing their reach into the community through various charity efforts, with their newest effort set to begin Feb. 22, 2016, at the season opener against Central High School in Baton Rouge, which seeks to benefit St. Jude Children’s Research Hospital in Memphis in a program entitled Strikeouts for St. Jude. 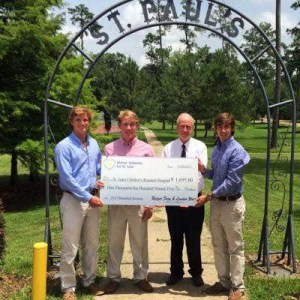 “We chose St. Jude because it focuses on the children and preserving their futures, (and) also because it is a non-profit hospital depending completely on donations,” senior Rutger Fury said. “The families of St. Jude are never asked to pay a bill; that’s something we found inspirational.”

This charity was created last season by three current baseball seniors, Landon Waite, Rutger Fury, and Blake Locicero. The Wolves will donate a certain amount of money to St. Jude’s Children’s Research Hospital for each strikeout thrown by a St. Paul’s pitcher.

“Our motivation comes from our shared agreement that we, as men of God and citizens of humanity, have a moral obligation to help in need in any way we can,” Fury said.

The donation works by pledge amount per strikeout. For example, if someone pledges twenty cents for each strikeout, and the Wolves throw a total of 165 strikeouts this season, that person will donate $33 to the charity. Last year, the Wolves donated $1,795 to St. Jude, and hope to give even more in the 2016 season.

Other St. Paul’s students have created similar charities linked to athletic accomplishments, most notably Beau Briggs and his “Birdies for Beau” charity. Beau donated a certain amount of money for each time he scored a birdie while playing for the SPS Golf Team in his junior and senior years to a local charity.

A poster board in the hall of the Main School Building at SPS encourages students to donate to the charity. (Photo by Carson Caulfield)

The baseball team has already donated their time to three different charities during the 2015-2016 school year. In a six-week span during September and October, the seniors volunteered at the Miracle League charity foundation. Secondly, the entire baseball program attended the Rotary Club Christmas Food Drive before Christmas in order to prepare and sort meals to serve hundreds of impoverished families in the Covington area. Strikeouts for St. Jude is the third charitable effort by the Baseball Wolves as a team.

The entire SPS baseball community asks the public to consider pledging to this organization. To donate, either email strikeoutsforstjude@gmail.com , or ask any member of the St. Paul’s Varsity baseball team about donating.