You are here: Home » Can the 50th Anniversary Saints Pull off a Playoff Spot?

Ah, the New Orleans Saints. What has happened? Where has the time gone? It has been seven years since the Saints’ Super Bowl XLIV win. They have fallen off and lost almost all of their talent from the good ol’ days, but really, what happened?

Well, you see, Father Time has not been especially kind to the Saints after their Super Bowl win. Just this past off-season, the Saints ended the streak of possibly the greatest wide receiver-to-quarterback duo in NFL history — Drew Brees to Marques Colston — with the release of Colston. Their defense has missed every beat possible since 2012. They have made some good decisions in the past few years, such as re-signing Drew Brees, drafting Kenny Vaccaro and Terron Armstead, as well as signing many very promising undrafted free agents. However, bad decisions have plagued the Saints since 2012, i.e. trading Reggie Bush, Kenny Stills, and signing Jarius Byrd, which, I’ll be honest, sounded and looked like a fantastic signing, up until he blew out his knee.

So, what’s the primary problem? Everything begins with the ownership. Although the Saints had already been plagued with bounty-gate and other issues, when Tom Benson locked his children out of the business, that was the real moment the Saints tanked. Tom Benson is way too nostalgic. He won’t let go of the people who were working for the Saints when they won the Super Bowl. To prove this, look at the people who make the personnel decisions. The General Manager, Mickey Loomis — and I don’t care what you say about him — is a very accomplished and established General Manager. However, he is a very ‘in the past’ kind of GM. It’s just not working anymore. 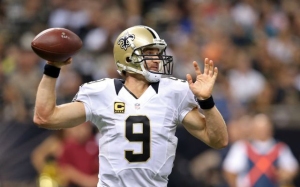 Now for one of the only bright spots for the Saints: Drew Brees. This man is the G.O.A.T. (Greatest Of All Time). He is a first-ballot Hall-of-Famer, easily and quite possibly the most underrated quarterback of all time. He has over 62,000 career passing yards and 438 career touchdown passes. Just this season, he broke Peyton Manning’s record of most 400+ yards passing games with 16. Other bright spots include wide receiver Brandin Cooks, who burst on to the scene of stardom last season with over 1100 yards receiving and 9 touchdowns. Running back Mark Ingram a has been a solid back for the Saints since 2011. Although not being a constant 1000-yard rusher, he has shown flashes of greatness and made it to the Pro Bowl in 2014.

So, even though the Saints are 2-4, there are still ways to win the division and get to the playoffs.  One way of this miraculous thing happening is if the Falcons lose to the Buccaneers again, and lose to the Panthers, but also lose to the Saints. The Saints would have to beat Tampa twice and beat Carolina again. They need to hope that the Falcons lose to a team that the Saints beat, and we need to keep our eyes on Tampa Bay. The team could get to the playoffs if they win one of the two wild card spots, but that will come into play later in the season.

All in all, remember that it’s still early, so don’t lose faith in the ‘Aints yet. Who Dat!