You are here: Home » Huge Crowd Turns Up for Grandparent’s Day

Max Tepper and his grandparents prepare for the prayer service. (Photo by Karen Hebert)

(COVINGTON, La.) — The annual celebration of Grandparent’s Day, held this year on Friday, Oct. 14, served in bringing together families to share in the tradition and values of St. Paul’s School.

Campus Minister Jeff Ramon directed a prayer service at the start of the event to kick things off, leading the crowd in songs, intentions, and reflections.

The quality of the event was enhanced by the performance of the Liturgical Band, JROTC Cadets, and the Mother’s Club, who provided music, assistance, and food, respectively. 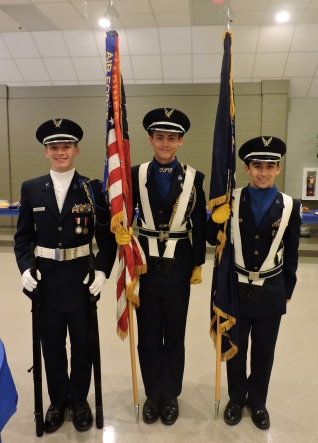 The AFJROTC Color Guard stands behind the crowd after presenting the flags. From left to right: Alex Seese, Ruston Keller, Stephen Cangelosi (Photo by Karen Hebert)

Often considered a highlight of the annual event, President Bro. Ray Bulliard, FSC, gave a speech to all of the students and their grandparents following the prayer service.

In this speech, Bro. Ray mentioned how blessed he felt for being able to speak in front of all of the students and grandparents who were present, as well as how it is sometimes rare for family to have a genuine gathering.

Over the course of his presentation, Bro. Ray asked the students to individually explain some core elements of St. Paul’s life to their grandparents, as well as some of the individual experiences they have had. Bro. Ray explained that the purpose behind starting these talks, instead of giving the descriptions himself, was to get grandparents and grandsons to engage in real conversations through something other than a phone call or text messages.

“It makes you just wish that every young man could come and be here and have this whole environment at such an important part in their lives,” Eleanor Borgatti, grandmother of Matthew Borgatti said. “It is truly a gift.”

Parker Hagood, senior, and his grandmother enjoy the event. (Photo by Karen Hebert)

“Family is everything,” Bro. Ray said, “next to almighty God.”

Like countless others before them, the grandparents present were impressed by Bro. Ray’s speech, which has been a staple of many previous Grandparent’s Days.

“We think he’s just the most wonderful man,” Eleanor Borgatti said, “He really cares about all of his students, and we just admire him so much.”