You are here: Home » Loss of Land Continues on Louisiana Coast 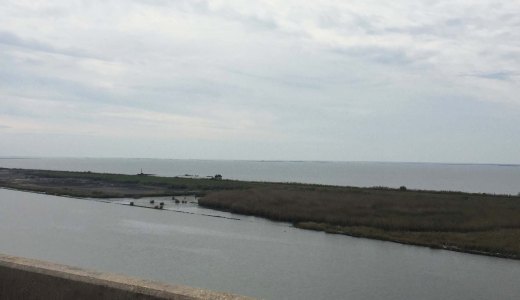 The view atop the Empire Bridge shows that the barrier between the Gulf and the town of Empire, La., has been reduced to a narrow strip of land due to coastal erosion.
(Photo by Ethan Hopel)

(COVINGTON,La.) — Southeast Louisiana continues to suffer from coastal erosion due to multiple factors, which at the current rate is losing land the size of a football field per hour.

“Due to the fact that we live in coastal Louisiana, even here,” Biology and BioMed II teacher Ann Pfalzgraf said, “it’s critical that we preserve our coastal wetlands, because they’re buffers for hurricanes. They also help produce fish, shrimp, crabs — that’s a huge economy that we need, and we’re losing them.”

According to Paulina Kolic, a Science Policy Fellow with the National Academies of Sciences Gulf Research Program, “Coastal erosion occurs when land is worn away by events such as flooding, sea level rise, and strong storms and hurricanes.”

It’s also due in part to when the Mississippi River was dammed in 1927.

“We didn’t want water in our houses,” Pfalzgraf said, “(but) rivers are not happy being in one location. The Mississippi River had changed course six times prior to us making the levees. It wants to become the Atchafalaya River, but then everything between New Orleans and Morgan City would flood, and we wouldn’t have the port of New Orleans anymore.”

The Mississippi River continues to show signs of resistance against the levees, which have undergone constant and fruitless attempts to contain the erosion. (Photo by Ethan Hopel)

Another reason for coastal erosion that is more overlooked than others is global warming.

“A lot of people are in denial about global warming,” Pfalzgraf said, “but you have to look at the data we have. If you melt the glaciers at the poles, you’re going to have a sea level rise.”

The problem of coastal erosion needs a solution, and it needs one fast, but the solution itself can be proven to cause more issues.

“The problem to fix it is money, for one thing,” Pfalzgraf said. “When you’re looking at Federal money, you have to convince the entire country that it is a critical problem, not just for Louisiana and Mississippi, but for the country. Eventually, if we don’t do something about it, New Orleans is going to be ocean-front property.”

This problem is creating havoc, including predictions that Grand Isle has only 75 years left to remain above water, and Port Fourchon has about 50 years left.

“Many coastal communities are facing the loss of their homes,” Kolic said. “The community that lives on the Isle de Jean Charles has lost 98% of their land, forcing them to relocate.”

As coastal erosion continues, the solution for the problem can be seen as more farfetched. The longer we take to actually take action, the harder this problem will be to solve.

“(If) Mother Nature takes a hit, she can fix herself,” Pfalzgraf said, “but we’ve been abusing it for so long because we used to think marsh and swamps were just wasted land; we didn’t know (their) value.”

Some people have discovered a temporary solution, but it comes with some major downsides.

“What they’re trying to do now for a solution,” Pfalzgraf said, “is they will go into an area that isn’t populated, and they’ll build a diversion. They take a chunk out of the levee out and let some of the Mississippi River drain in, like the Bonnet Carre Spillway. But we usually have an algae bloom from all the extra nutrients that come down from the river. It results in too much sediment; the fish can’t live.”

Pfalzgraf hopes that a solution will be found soon, as she is able to witness this coastal erosion on a personal level.

“I have a camp in the marsh in Lafayette,” Pfalzgraf said. “Every year, I go out there to fish, and every year it’s more open water: More land is lost.”

Ethan Hopel is the editor and writer for Distant Writings. He enjoys writing about current events, and opinions. Feel free to contact him at ethanhopel199@gmail.com View all posts by Ethan Hopel →

One Comment on “Loss of Land Continues on Louisiana Coast”