You are here: Home » Bowling Wolves Set to Begin 2017 Season

(COVINGTON, La) — As 2016 concludes and 2017 begins, swimming, football, and cross country have come to the end of their seasons. Further, as soccer, basketball, and wrestling are in the heat of their seasons, there is one sport that seemingly flies under the radar.

The SPS bowling team, a less prominent and much newer institution, also began practicing for the 2017 season near the end of 2016.

Three times a week, the eight SPS bowlers board a bus accompanied by the SSA bowlers and head to practice. The practices are held at Tangi Lanes in Hammond, which is about a 30-minute drive from campus. Practicing there for three hours, the team warms up by running through drills on form. Soon after, groups are broken apart which continue to play three consecutive games against each other.

The length of these practices, along with the inconvenient location, can be a burden on student athletes, but the SPS bowlers don’t seem to mind.

“The ride to Hammond really isn’t too bad,” junior Bowler Beren Perry said. “It actually allows me to get a lot of homework and studying done, and coach (Bertucci) really knows what he’s doing.”

The bowlers are technically in pre-season, but their practice schedule is in full swing in order to reach their goal of district champions. 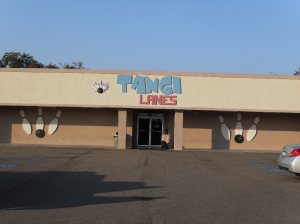 Coach Peter Bertucci, with assistance from Coach John, have over 60 years of bowling experience. That said, 2017 will be only the second year SPS has had a varsity LHSAA bowling team. Last year, the SPS bowlers did surprisingly well for being a first year team, making it to district but losing in the second round.

This year, the bowling team will be fortunate enough to keep its two best performers. Sophomores Peter Bertucci and Jonathan Wellmeyer led the bowling team last year in overall score averages. These two bowlers’ averages are expected to rise as they have shown a notable dedication to the team, practicing together every Saturday throughout the summer.

With a long season beginning in late January and ending in April, the SPS bowling team has a lot of work to do as a seldom recognized sport, but their morale and determination will inevitably propel them to success.

One Comment on “Bowling Wolves Set to Begin 2017 Season”