You are here: Home » 89-Member Cast in Rehearsal for Spring Musical ‘Fiddler on the Roof’

(COVINGTON, La) — The cast for the spring musical “Fiddler on The Roof” has been announced, and rehearsals are now in progress with the Marian Players production scheduled to run in late March. 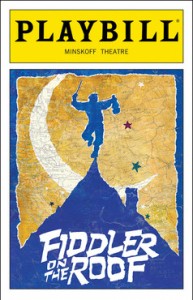 The playbill of “Fiddler on the Roof” as performed in Broadway Theatre in New York City. (Photo: Playbill.com)

The cast of  “Fiddler on The Roof” contains 89 members and over 40 boys from St. Paul’s. The Marian Players have introduced a few new cast members, such as sophomore Jacob Eilers.

“Since I moved here from Arizona, my sister was involved in a lot of plays,” sophomore Jacob Eilers said. “I figured I would give it a try.” Although Eilers hoped for the role of the Constable, he is excited to have been cast as a Russian Soloist.

“Fiddler On The Roof” is a play that is surrounded with vibrant characters and their love for each other, their love for God, and their Jewish tradition. The main characters on the play consist of Tevye, Fyedk, Tzeitel, and Yente. Junior Isaac Hebert got the lead role and will play Tevye.

“I play Tevye, the main character,” junior Isaac Hebert said. “This the first lead role I’ve gotten, and I am nervous.”

The Marian Players have rehearsals every Monday, Wednesday, and Friday as of now. As time goes by, the rehearsal schedule will tend to get busier, and more “brutal.”

“I am a Russian soldier in the play,” freshman Gabe Daigle said. “ I’m comfortable with it. I get to do some pretty cool things and I have to perform a backflip, which is a piece of cake.”

Also, like many of the school’s sports, rehearsal carries with it the threat of injury.

“On the first night of rehearsals I got injured.” junior Tyler Chelena said, who fell during the rehearsal but was not seriously injured and has since recovered.

The musical rehearsals tend to be busier, and practice is key when it comes to song performance and dancing. But, in the end, after every play there are benefits that pay off from all the hard work.

“To me,” junior Isaac Hebert said, “theatre has been one of the most welcoming groups on this campus. You get along with many people — like you would see a football player hanging around with a kid in the band, it’s like a mixed group. It gets people out of their comfort zone, and theatre gets you over a lot of obstacles.”

The production will begin on March 22, and tickets will go on sale in early March.

Zac is a junior at St. Paul's and is a reporter for The Paper Wolf, a member of the Beowulves' writing club, and a Marian Player. Zac mainly covers theatrical arts and news around the school. Zac is also a competitive cyclist and also surfs whenever the season for surfing kicks in. Contact Zac Russ at zachary.russ.2018@stpauls.com View all posts by Zac Russ →