(COVINGTON, La.) — Known to nearly all New Orleans parade-goers, the SPS Marching Wolves are an award-winning organization whose signature dances, cadences, and songs actively entertain crowds of millions. Now, after receiving an invitation to the prestigious 2018 London New Year’s Day Parade, the Marching Wolves have been presented with the opportunity to travel across the Atlantic Ocean to London, England, where they could showcase their distinct “southern gentleman” style in front of unsuspecting crowds.

“It’s an achievement to be asked to perform at the international stage in another country,” Marching Wolves director Andrew Moran said. “It is a huge, huge deal. It means that you’ve really become a high caliber group.”

Excited crowds assemble along the London New Year’s Day Parade route in anticipation of the several performers to come. (Photo by Matt Sprake)

The London New Year’s Day Parade is an annual parade through the streets of London’s West End. This annual celebration, occurring at 12 p.m. on Jan. 1, welcomes the beginning of each new year. The parade is widely considered the largest New Year’s Day street event of its kind, and is a lively spectacle that attracts audiences from around the world.

“There’s plenty reward in being invited to the London New Year’s Day Parade,” Moran said. “As a band director, it’s always been a goal of mine to get into the largest parades at the largest venues.”

For these performers to gain admission into the London New Year’s Day Parade, a traditional application was not requested. Rather, potential performers are recruited thoroughly by the parade’s unknown selection committee. 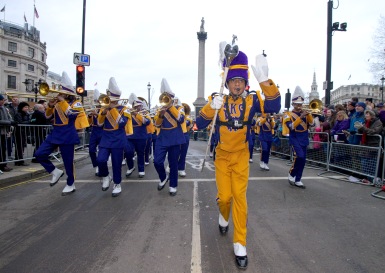 Last year, over the Easter Holidays, the Marching Wolves performed at Festival Disney, a competition for school bands occurring throughout Walt Disney World. Here, they earned a Superior rating, while achieving the Marching Band Gold Award and Parade Band Best in Class. With the achievement of these accolades, the Marching Wolves established an eye-catching résume capable of turning heads in the marching band world.

“Receiving an invitation to the London New Year’s Day Parade was a direct result of the great performance we had at Disney,” Moran said.

For the Marching Wolves, their potential trip to London in 2018 would be monumental compared to their previous trip to Orlando, Florida, in 2016.

“The band would be performing at a different level than they ever have before,” Moran said. “The parade route goes right past some of the most historic landmarks in the world. That’s a huge part of the performance element. I personally think it would be the performance of a lifetime.”

London is consistently voted as one of the world’s most popular tourist destinations. The lively city is packed tight with historic monuments, renowned landmarks, significant buildings, and critically-acclaimed eateries. The London New Year’s Day Parade route passes by many of these attractions, immersing performers in the history of the aged city as they march the scenic route.

Besides taking part in the parade, the Marching Wolves would also be allowed to explore London in their spare time. 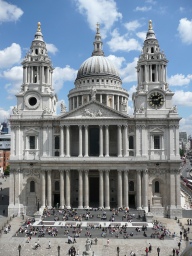 The St. Paul’s Cathedral would be among the many historic sites visited by the Marching Wolves during their trip to London. Here, they would have the opportunity to celebrate mass while delving into the rich history that London offers. (Photo by Phil Parsons)

“The entire time we would be there, we would be going places, seeing things, and doing things,” Moran said. “We would tour castles, tour landmarks, and go all over the city. It would really be a nonstop adventure.”

“It’s an extremely expensive trip to plan,” Moran said. “In addition to all the members of the Marching Wolves, the band would have to bring along parents as chaperones. In total, the costs would be over $300,000. It’s a huge undertaking.”

Currently, the Marching Wolves are searching for financial donors to help make their dream of performing in London a reality.

“I’ve tried all kinds of fundraising outlets,” Moran said. “I’ve looked at just about every grant and foundation possible that’s in our local area.”

Although the Marching Wolves cannot currently financially support this costly endeavor, there is still hope for the band to perform in London in a later year through a long-term fundraising effort.