You are here: Home » Some Students Fair Game for State Science Fair 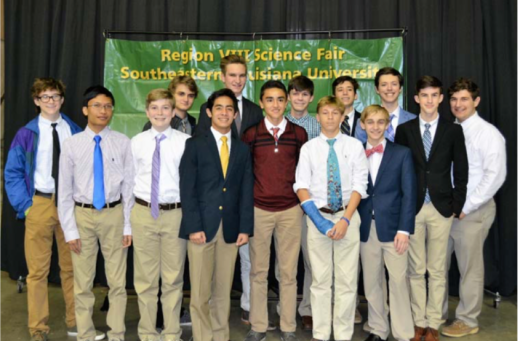 SPS students participating at the Region 8 science fair enter the event and prepare to compete with students from across the region. (photo courtesy St. Paul’s School)

(COVINGTON, La.) –Jan. 27, 2016, the St. Paul’s science fair winners got the chance to compete at the annual science fair at Southeastern Louisiana University. The fair had many categories for the students to participate in. Out of all the SPS students that went, many placed and will be going to the state level science fair.

At the Southeastern fair, students set up their boards and waited to present them to the judges. The judges went to each project individually.

This was a new experience for many participants such as Kristian McHugh and his partner, Matthew Lyon. They did their project by testing if rock sediment affects Daphnia Magna, and won in their category.

For many students, this was a great opportunity to show off their science skills and get their name into the science world as well. It’s also a great resume builder for colleges.

These students are now preparing for the state fair to be held at Louisiana State University in March.