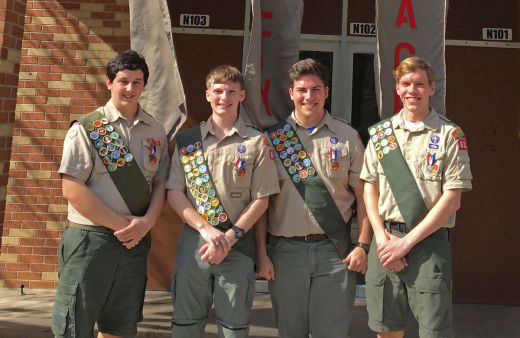 (COVINGTON, La.) — On Jan. 14, Boy Scout Troop 611 held a Court of Honor at St. Paul’s School for the promotion of  four of its members to Eagle rank. These new Eagle Scouts are Jeremy Boudreaux, Alex Seese, Austin Scheyd, and Evan Vamprine, who are all seniors at St. Paul’s.

“It was awesome,” Seese said. “I spent ten years as a scout, and I finally reached the pinnacle.”

A banner displaying five values of Boy Scouts is hung over the cafeteria. (Photo by Austin Scheyd)

A Court of Honor is a troop activity where scouts and their families come together to get their awards. It could be celebrating scouts receiving rank advancements, merit badges, and other awards, but the Eagle Scout rank advancement is one of the most celebrated.

“Seeing all the people who sent me gifts or showed up for the Court of Honor was amazing,” Seese said.

Seese’s father and grandfather were also Eagle Scouts, so this made him the third generation to achieve this rank.

Scouts are required to earn a total of 21 of the 136 merit badges, 13 Eagle-required and 8 elective, and complete a service project helpful to a community to advance to the eagle rank.

“I started my scouting career in first grade and eventually became a Boy Scout” Scheyd said. “After a few years and completing my project, I became an Eagle Scout.”

Boudreaux’s project was installing bike racks at St. Paul’s, Seese supplied 58 care packages to Operation We Care to deliver to active military, and Vamprine led a group of scouts to install shelving and clothing racks at the Northshore Food Bank.

“I planted the 25 azaleas in front of the new gym,” Scheyd said about his Eagle Scout project.

According to the National Eagle Scout Association, only about five percent of those who join a boy scout troop go on to become eagle scouts; that makes an estimated two million since its beginning in 1912.