You are here: Home » One-on-One with Kyle Erf, the Computer-Coding Comedian 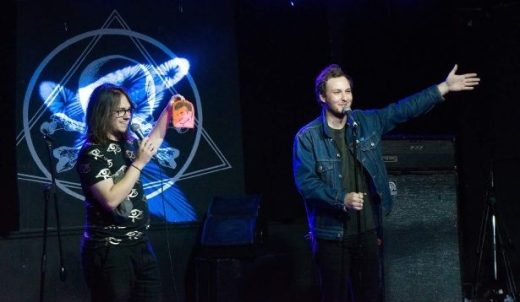 (NEW YORK) Computer coding and comedy seem like vastly different pursuits that require very different abilities to excel, and in many ways this is true. The cold ability to analyze that is standard of most computer coders and the free-flowing creativity inherent in most successful comedy writers and comedians seem like the complete opposite of each other. While this may be so, both professions actually require both abilities. For example, computer coders have to think creatively when solving unique program problems that can’t be tackled in a conventional way. Conversely, joke writing requires as much analysis as it does spontaneity. From analyzing a situation to find the best comedic angle, to intensely scrutinizing a joke to see how it could be improved, comedians and comedy writers analyze things all the time.

Someone who brings these two trades together is Kyle Erf, a New York-based comedian and comedy writer who also writes code for one of the biggest technology companies on Earth, Google. Erf, 26, has written for notable comedy websites such as Funny or Die, The Hard Times, and Above Average. Additionally, Erf performs sketch and stand-up comedy around New York City.

In high school, Erf began honing both his creative and computing skills but did not forsee where those talents would take him. (photo courtesy Kyle Erf)

Erf, raised in Fayetteville, Arkansas, describes his teenage self as a “pretty dorky kid.”

“I was really into computers and video stuff,” Erf said, “and I was really good at school.”

While Erf excelled academically, he also explored his creative side.

“I had always had an interest in filmmaking,” Erf said. “Even when I was younger I would make stop-motion animation movies with Legos.”

As a teen, Erf’s career aspirations vacillated. He initially wanted to become a film director, but he abandoned this pursuit once he realized that it required skills he did not have such as “managing people with big egos.”

“I found I enjoyed writing more,” he said.

At some points, he even believed he would end up in the video game industry because it was a “nexus of creative stuff and computer things,” two interests that consumed much of Erf’s teen years.

Erf was just into his teens when he realized he had a knack for comedy.

Erf started actively pursuing comedy in 2009 when he attended Swarthmore College, where he wrote for the university’s humor magazine, Spike Magazine, and eventually performed in two sketch comedy groups. His success did not come easy, however, as he was initially rejected from every comedy group on campus, except for Spike Magazine, which did not have an audition process. While these early rejections devastated Erf at the time, he later realized these failures did not mean as much as he once thought.

After graduating from Swarthmore in 2013, Erf wanted to move to a place where he could pursue comedy but also get a job in technology. While some people who pursue careers in the arts throw everything they have into their pursuit and often struggle to make ends meet, Erf, who described himself as “a very play-it-safe kind of person,” wanted a steady job so he could comfortably support himself while still writing and performing comedy.

He found he could do that in New York City, which is widely known as one of the best cities in the world to be involved in comedy.

Fresh out of college, Erf landed a job at a small database company called MongoDB. From there, he started seriously pursuing comedy, in particular, stand-up comedy.

“When I first moved to the city I was like, ‘That’s what it is. I’m gonna be doing stand up comedy.’ But it ended up being that that’s not where my greatest strengths are, and it’s a really exhausting pursuit,” Erf said. “I have such admiration for anyone who can really put the time in. I still do a lot of (stand-up comedy), but not as much as I used to.”

In late 2015, Erf became a contributor for The Hard Times, a satirical news website that focuses on the world of punk rock and sees millions of page views a month. His second article for the site, Lucky Airline Passenger Wins Free Five-Hour Spoken Word Concert by Jello Biafra, took off, quickly being shared thousands of times and even being shared by the Facebook page of legendary punk rock band, Dead Kennedys. As of right now, the article has over 84,000 shares.

Since his first article published in January 2016, Erf has become one of the site’s top contributors, having written around 100 articles, the most of any contributor in the site’s history.

“Kyle Erf is one of the most consistent and original contributors The Hard Times has,” The Hard Times co-founder and managing editor Bill Conway said. “His ideas are always original and satirize avenues most people miss.”

In addition to writing articles for the site, Erf also produces video content for The Hard Times, using editing skills he learned as an amateur filmmaker during his youth. His first video, posted last month, garnered over 100,000 views within five days.

Being accepted as a contributor for The Hard Times kicked off a series of successes for Erf in the world of web comedy writing. He has since written for prominent comedy sites such as Funny or Die and Above Average. He even wrote jokes for the 2016 Alternative Press Music Awards, an annual televised music awards show held in Cleveland, Ohio.

As Erf found success in the comedy world, he found the same in the world of coding. Working as a programmer for MongoDB, Erf collaborated on different projects and gave numerous talks on the subject of technology and coding, such as this one from November 2015.

Erf says performing comedy has supplemented his tech career in that he has become adept at presenting to audiences, which he notes is something a lot of people in tech struggle with.

“I’ve done a lot of talks at conferences, and that’s just performing,” Erf said. “At a certain point, your information is only as good as the way you’re able to convey it.”

In February of 2017, three and half years after graduating from Swarthmore, Erf started working for Google, a juggernaut of the technological industry. There, Erf programs and works on the tools Google uses to hire new employees.

“Hiring in any industry is really complicated,” Erf said, “because you’re trying to predict if someone will be good at something based on just a few hours you spend with them. You’re potentially hiring this person for a decade, if you’re lucky.”

Much like comedy, Erf says that while coding may be difficult, it is also very rewarding.

“It’s one of the few jobs where you can make something from nothing,” Erf said.

Regarding his ability to juggle both careers, Erf says, “It’s a really good combination, but it’s exhausting, also.”

Throughout the past few years, Erf has noticed the surprising similarities between the worlds of coding and comedy, respectively.

“Writing comedy with others, you have to combine all of your ideas into whatever is the funniest and the most compelling, which usually means everyone thinking their own ideas are best,” Erf said. “A skill that I’ve learned in both worlds is realizing an idea isn’t just better because it’s mine. It’s key to make a fair assessment of other people’s work and learn to love those better ideas. A lot of programmers and comedians have so much trouble with that.”

Of the future, Erf says he wants to learn more about screenwriting, as well as continue to produce video content for the web. Also, he wants to continue writing comedy for the internet because he believes he has not “hit the ceiling on that yet.”

“The thing I’ve learned over the past couple years — I feel like I’ve matured a lot in my art — is to not think too far ahead,” Erf said.