You are here: Home » Wolves Down Bears in Semifinals, Advance to First Basketball State Championship in School History 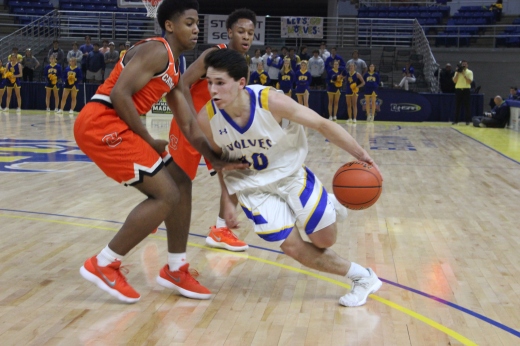 Sophomore Bill Leahy drives inside on Catholic High junior K.J. Singleton in the first quarter of Thursday’s semifinal game in Lake Charles. The Wolves squeaked out a tight victory over the Bears, 59-52. (Photo – Spencer Fox)

(LAKE CHARLES, La.) Thursday, March 8, 2018, was already a historic day for St. Paul’s, as the Basketball Wolves were competing in their first ever semifinal game in Lake Charles, Louisiana, at Burton Coliseum. However, the day became one of the most memorable in the school’s storied history as the 2018 Basketball Wolves advanced to the first state championship game after defeating the Catholic High (B.R.) Bears by a score of 59-52.

The Wolves and the Bears were the state’s #2 and #3 teams, respectively. This game showed how well-matched the teams were by the close score throughout the contest. The Bears got out to an early start, but SPS senior Chandler Owenby had three monster dunks to ignite a spark underneath the Wolves.

“I thought we got a little impatient and were settling for shots a little too quickly and not making them have to guard,” Head Coach Stephen Dale said to The Times Picayune. “They’re a good defensive team, but I don’t care how good you are defensively, the more seconds we make you guard, the worse you get.

“As soon as we saw the ball go through the basket again, because it had been such a long stretch without scoring, I think everyone thought, ‘We’re good; we’re back in this.’ Consequently, we took off from there,” Dale continued.

After this confidence boost, the Wolves brought the score to 13-all by the end of the first quarter. The second quarter proved to be a little more evenly matched. The Wolves and Bears both played tenacious defense, blocking shots and making plays off of turnovers.

The second half of this match was the most exciting second half of basketball of the entire season for the Wolves, who were leading 30-28 coming out of halftime. By halfway through the third quarter, however, that all changed when Catholic came back to get their first lead of the game since the first quarter. Catholic increased their lead to 43-39 at the end of third quarter.

In the fourth quarter, star senior guard Parker Edwards turned it on, and led the Wolves back and pulled out the victory with a 59-52 win. The Wolves defense held the Bears to just 9 points in the fourth quarter, while the Wolves scored 20. Edwards, who is typically unmoved by the pressures of the game, played with visible emotion for one of the first times this year.

“It just came out; I don’t know where it came from,” Edwards said to The Times Picayune. “You’re right, I’m not usually emotional like that … I have given all I have and I’ll give this team whatever I have to win.”

And the Wolves are moving on to the State Championship! The Wolves will face the Scotlandville Hornets on Saturday night at 6:00 in Lake Charles. pic.twitter.com/hJgNXN6LQA

Edwards posted 34 points in the game, after only having 3 points and going 1 of 6 in the first quarter. However, in the final three quarters, Edwards went 9 of 17, with 6 of those shots coming from 3-point land.

Owenby finished with a double-double by grabbing 12 rebounds and putting up 10 points.

The Wolves are advancing to the first state title game in school history on Saturday, March 10, and it means the world to the seniors on this squad.

“I have been with these guys since I was in eighth grade, and we have been talking about making it to state since then. Now, we actually did it,” said Owenby to The Times Picayune. “It’s crazy; we have all been working together so long and so hard and finally we get a chance to (go to the title game).”

The game on Saturday will be an emotional one for the Wolves, win or lose, when they take on 5-star recruit and LSU Commit Ja’Vonte Smart and the Scotlandville Hornets on Saturday night (March 10) at 6 p.m. in Lake Charles at the Burton Coliseum.

One Comment on “Wolves Down Bears in Semifinals, Advance to First Basketball State Championship in School History”