You are here: Home » Lacrosse Wolves on a Hot Streak: Beat Mandeville 11-5, Catholic 9-1, and Brother Martin 6-1 in Home Games 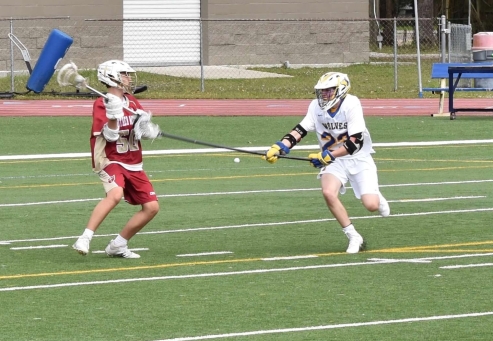 (COVINGTON, La.) The Wolves continue their winning ways, going 3-0 in their last three games playing tough games against Mandeville High, Catholic High and Brother Martin. The Wolves beat the Skippers 11-5, the Bears 9-1 and the Crusaders 6-1 in hard fought games against good teams.

The Skippers played the Wolves on March 9, keeping it close in the first half of their game, surprising the Wolves by holding them to five goals and scoring two of their own. The Wolves struggled to score and went into halftime with a lead of 5-2, looking to increase their offensive production in the second half. The second half played out much like the first, although the Wolves offense performed better and scored one more goal than they did in the first half, finishing the game with the 11-5 win.

The Wolves spent much of the game adjusting to the new-look Skippers, who last year lost to St. Paul’s 29-1. The Wolves defense couldn’t shut down the Skipper offense like it wanted to, but it still succeeded in limiting the opponent’s scoring.

The Catholic High (B.R.) Bears proved less of a challenge for the Wolves in the game on March 10, and they went scoreless in the first half, while the Wolves scored 3 to gain a 3-0 lead going into halftime. The Wolves’ offense played much better in the later quarters, doubling its output from the first half to score 6. The defense continued its domination by only allowing a single goal for the Bears, producing a final score of 9-1.

The Wolves performed significantly better against the Bears, allowing only one goal by an offense that focused on possessing the ball, which limited the amount of scoring opportunities for the Wolves. Even with less time on the ball, the Wolves were able to score 9 on a Bears defense that just couldn’t keep up. 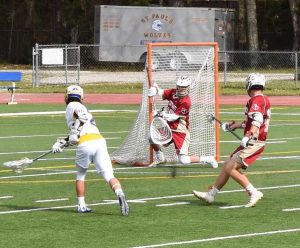 Attackman Chris Flood shoots on the Brother Martin goal during the March 17 game, which the Wolves won 6-1. (PHOTO: Lynne Nolan, used with permission)

In the first half of their game against Brother Martin on March 17, the Wolves had trouble settling the ball, leading to a frenetic back-and-forth from one side of the field to the other. The ball moved quickly, but the scoreline did not, and the Wolves slowly built a 4-1 lead through the half. In the second half, Brother Martin tried to maintain the fast and loose pace of the first half, but the Wolves successfully slowed down the game and possessed the ball more on offense. The Wolves added to their lead and kept the Crusaders scoreless to finish with a score of 6-1.

The biggest challenge the Wolves faced in the Brother Martin game was the weather. The humid heat cooked the turf and made it difficult to keep up high energy throughout the game, but the Wolves’ strong conditioning helped them push  through it. The Wolves’ defense played its best game of the season, allowing only a single goal to one of the top teams in the state. The offense would have scored more if not for a strong performance by the Crusader goalie, who made the offense work hard for every goal.

Although the scores were different, every game had a similar pattern. The Wolves offense improved in the second halves of every game, which could be attributed to slow starts or just underestimating previously weak opponents. The defense didn’t make the same mistake and kept their play strong and consistent throughout all three games.

“I think we played intense, smart lacrosse against three great teams, and this showed during the games,” Wolves team Captain Michael Philippe said. “The Offense scored an incredible 20 total goals against some of the best defenses in the state. The Defense only allowed 7 goals, showing our dominance on both sides of the ball. While the Offense and Defense both have areas where we need to improve, I was proud of the intensity we brought and the way we came together as a team.”

The Wolves look to continue their string of strong performances in their district games Wednesday (March 21) at 6:30 p.m. against the North Shore Spartans at Chappapeela Sports Park in Hammond, Louisiana, and Saturday afternoon (March 24) at 4 p.m. against the Ocean Springs Greyhounds at Greyhound Stadium in Ocean Springs, Mississippi.