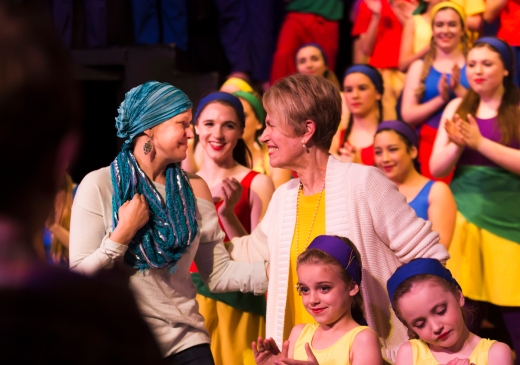 (COVINGTON, LA) Denny Charbonnet, director of the SPS Drama Program, otherwise known as the Marian Players, directed the final show of her 31-year career last Sunday, March 25. This year’s spring production, “GODSPELL“, is Charbonnet’s favorite production to direct, which explains why this is the seventh time SPS has seen GODSPELL during the Charbonnet era.

“This is the perfect show to be my final show here,” said Charbonnet. “And as Mr. (Barrett) Baumgardner (assistant director) said, seven is the number of completion.” 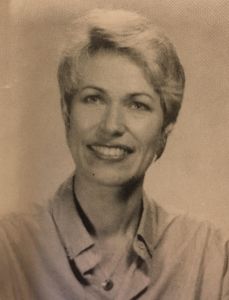 Denny Charbonnet from her first year teaching at St. Paul’s. (Photo: The Connifer, 1988)

Denny Charbonnet was President Brother Ray Bulliard, FSC’s, first hire as principal of SPS in 1987. She has been a long standing part of the SPS and local community ever since.

“She had one period with about twelve students,” Bro. Ray said, “And from that one period, she has built one of the most successful drama programs in high school, anywhere. My gratitude to her can not be put into mere words. I’m indebted to her beyond words for what she has done to this school, both from a drama perspective and a spiritual perspective.”

After the final scene of GODSPELL, the cast and crew became highly swept up in emotions. So many members were weeping at the thought of Charbonnet’s retirement, that her grandson, Jude, went around the cast with a full box of tissues.

“She’s been a part of this program forever,” said Christian Butler, who played the lead role of Jesus in this year’s production of GODSPELL. “She’s had a huge impact on my life, both spiritually and as an actor, so it’s hard to not see her coming back.”

Charbonnet says that this stage production was her last for SPS, but she plans to continue teaching and performing drama elsewhere in the community.

A packed house of Marian Players alumni join the current cast on stage for a curtain call of “Day by Day” in honor of Denny Charbonnet’s impending retirement. Full story on this end of an era to follow soon. pic.twitter.com/DdnypyvOcN

“I feel like this is what God is calling me to do,” Charbonnet said. “He is calling me to move on, to spend more time with my family, and be more available to them. But I will continue to do theater. It’s just too much of a part of me, and too much of what I feel God has given me. So there’s more, there’s always more.”

The new SPS Drama Program Director has yet to be announced, but Charbonnet is hopeful for the future of the program, which has been around far before her era.

“To whoever comes in, I want them to do it their way,” Charbonnet said. “It’s going to be something fresh and new. But I do hope and pray that the appreciation of all of this being a gift from God, that we give glory back to Him by all of the work that we do here, will remain here.”

And although GODSPELL was Charbonnet’s final full stage production at St. Paul’s, she states that she does hope to return to campus each year to produce the annual “Passion Play” for students during Holy Week. This year’s Passion Play will be performed tonight (March 27) for the public in the Briggs Assembly Center at 7 p.m. and for students tomorrow (March 28) during the school day.

The 2018 GODSPELL cast, many of whom were very emotional for her departure, gathers on stage during Charbonnet’s final curtain call. (Photo by Carson Caulfield)