You are here: Home » Back to Back: St. Paul’s Brings Home 2018 Challenge Night Trophy

St. Paul’s won the first match, but fell in the second match. In the tie breaker, the Wolves led up until the last moments when the Doves made a surprise comeback to win. While the boys lost, it was the first time SPS forced SSA into a third set since 2012.

“I thought the boys fought well, we didn’t come away with the dub, but I think the ref turned this one into a bit of a ‘doozy’,” said senior and Assistant Volleyball Coach Kevin Schneider following the match. “I think we can still bring home the trophy tonight.” 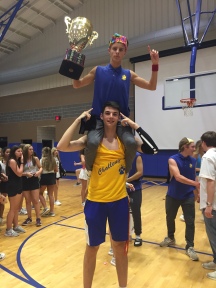 After the volleyball game, St. Paul’s handily won the free throw contest for 5 total points which tied up the total score. Next came the relay race, in which students run across the gym in odd ways (crab walk, running backwards, etc.) and change into the uniform of the opposing school. St. Paul’s also won this event, making the score 7-5. Yet, SSA won the next competition, dubbed “the mummy wrap,” to tie the score at 7-all.

At halftime, the usual dance competition was ready to commence. However, this time, SSA was not ready. Without a dance team, ten St. Paul’s seniors blew the crowd away with their dance that they spent 45 minutes practicing earlier that day.

Once the halftime festivities had concluded, St. Paul’s defeated SSA in “cookie face,” for the first time in Challenge Night history, thus advancing the score to 9-7. This game requires students to move a cookie from their forehead to their mouth without using their hands.

Going in to the final game, balloon pop, SPS held a two-point lead over SSA. If the boys won, it was over. If they lost, the competition would advance to a tiebreaker. For the fourth year in a row, the boys dominated the balloon pop contest. And when the final pink balloon burst, the gym floor became flooded with the back-to-back champions, the St. Paul’s Wolves.