(COVINGTON, La.) — Fresh off a run to the state championship game and an undefeated District 6-5A championship, the Wolves plan to not skip a beat in the new year with a new team. Losing 2nd All-Time scoring leader in SPS history, Parker Edwards, the Wolves will need new faces to step up. Coach Stephen Dale is entering his third year as head coach at St. Paul’s with a record of 57-15, and state championship appearance under his belt.  The Wolves seek to not fall short again this year. 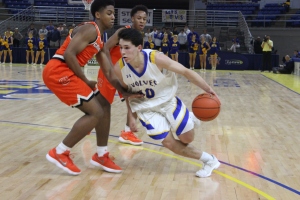 Junior Bill Leahy said, “I expect myself to do whatever it takes this year to help my team win.” He has been on the varsity squad since his freshman year where he started a couple of games.  “I hope the team plays together this year and not as an individual game, but a team game,” said Leahy. As for the loss in the state championship he said, “I do not look at it and regret it, but I take it as a learning experience. I also hope to make it back and win this year.” Leahy averaged 6.7 points per game with 2.5 rebounds and 2.4 assist a game. He looks to have a big role in the offense this year leading the Wolves at point guard.

The Wolves started conditioning a month into school, and worked out at 6:30 a.m. every Tuesday and Thursday. Actual practice started Monday, Oct. 8. St. Paul’s first scrimmage is Oct. 29 against Lusher High School. The first official game is Nov. 13 against Edna Karr at The Gene Bennett Sports Complex. The Wolves will be playing in four tournaments this year during the season, including the CYO Tournament, in which they have won two out of the past three years, the Northwest Florida Shootout, the Sugar Bowl National Prep Classic, and the Gene Bennett Classic. The team is losing a total of 54.1 points per game from the seniors last year. St. Paul’s averaged 65.18 points per game in the 2017-18 season.