You are here: Home » The Life of the Basketball Star With Special Needs

(COVINGTON, La) — Michael Lucio is an 18 year old junior at St. Paul’s School and is a team favorite on the varsity basketball team. He is a part of the CORE pack, which is the special needs program at St. Paul’s. There are currently nine students in the program, and Michael is one of five students coming back to the school from the previous year.  He has been a member of the team for two years, and since joining the team has been a focal point of the program. The energy and joy he brings to the team is an everyday occurrence that is unmatched by anyone else. No matter what the spirit is of the practice or game, Michael will always make the situation brighter. He enjoys making the playlists for the teams to listen to while they practice. He brings the energy at the end of the bench for the Wolves no matter the score, and is always cheering the team on to victory.

Michael first came onto the scene in August of 2017 during a conditioning practice and was very shy. He said, “My favorite memory was trying out the first day and meeting the players. I have made some of my best friends with the players, and I hope that we can stay friends forever.” Little did the team know that he was going to be a force with his outgoing spirit and his joy in talking about basketball and anything else under the sun. Michael would come in during the last couple of minutes of practice and the team would run a play for him to score. During his first season with the Wolves, Michael got the opportunity to get some playing time for the JV squad. When he came into the game the crowd erupted with cheers. As soon as Michael got the ball and scored everyone in the gym acted as if someone just made a game winning shot in the state championship. Michael likes to talk about his favorite parts of being on the basketball team. He said, “making the playlist is my favorite part of practice and The Beatles are my favorite band to play.” Michael also talked a little bit about what he likes to do in class. “I like to play on my computer and listen to The Beatles. My favorite song by them is Twist and Shout I listen to it everyday that I can.”

Jordan Eberts is a senior at St. Paul’s who rarely ever misses a game and always hopes to see Michael get in. He said, “I think it is phenomenal giving Michael this opportunity to experience high school basketball and have a fan base supporting him.” Michael is the fan favorite of the team and everyone continues to root for him during his journey with the Basketball Wolves.

Michael plans to stay on the team until he graduates in 2020, and hopes to make another state championship appearance this year with the team. He enjoyed the trip to McNeese State University for the state tournament and had fun on the bus ride up their with the team. After the loss in the state championship game, Michael was going around the locker room telling everyone that it was okay and that they tried their hardest which helped with everyone’s spirits. Even though basketball is his favorite sport, Michael is not a one sport athlete. He partakes in swimming at nearby athletic club, Francos. On the days he is not practicing basketball he is in the water getting better at swimming. 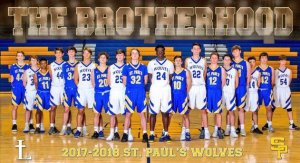 Michael (54) in his first basketball picture with the team in 2017. Michael is pictured on the far right. (Picture by: Joey Michel)

Michael has been a massive addition to the Wolves Basketball Team and the entire school. He walks around with confidence and knows most of the people he sees. He said that he will miss being part of the team and all of his friends after the season ends. Michael is the heart and soul of the Wolves’ basketball program.