You are here: Home » SPS Students Travel to Washington D.C. for March For Life 2019 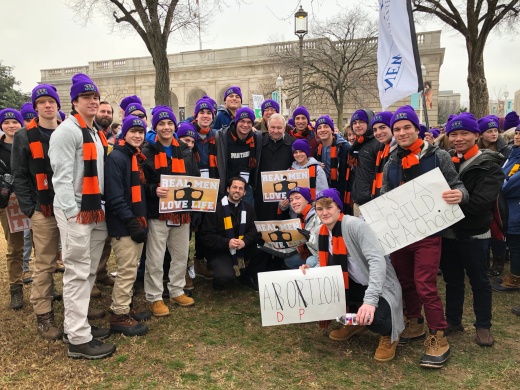 (WASHINGTON, D.C.) — Roe v. Wade, the 1973 landmark Supreme Court decision, ruled that abortion is a Constitutional right. Every year since this decision, hundreds of thousands of people have gathered in Washington, D.C. to protest by “Marching for Life.” The march has kept the pro-life movement alive in the U.S.

On January 20 St. Paul’s students participated in the March for Life. They traveled 24 hours by bus with other Archdiocese of New Orleans Catholic school students.  Students began their visit to D.C. by attending the “Geaux Forth 2019 Louisiana Right to Life Rally,” where they heard speeches from multiple people impacted by abortion. This rally was an essential part of the pilgrimage as it prepared students to stand up for life, even through controversy.

On the day of the march, the Archdiocese group attended a mass celebrated by Archbishop Aymond at Blessed Sacrament Church in Arlington, VA. While on the march, the students from New Orleans stayed together, proud to be a part of the hundreds of thousands of people fighting for life, just like them. They stopped in front of the Supreme Court and said a decade of the rosary for those contemplating or affected by abortion. 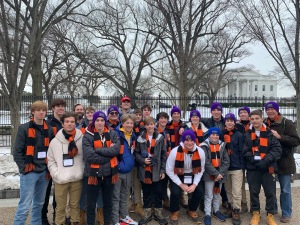 Some recent political moves have strengthened the original Roe v. Wade decision, which has sparked within many a newfound resolve to overturn the ruling. For example, Virginia Democratic Gov. Ralph Northam is facing backlash after he voiced his support for a state measure that would significantly loosen restrictions on late-term abortions. Gov. Northam believes in the pro-choice ideals and supports Virginia House Bill 2491, a controversial bill concerning the third trimester of pregnancy.

Under previous Virginia law, in order for a patient to terminate a pregnancy in the third trimester, three doctors must certify that continuing the pregnancy would likely cause the patient’s death or “substantially and irremediably impair” her mental or physical health. The new bill would reduce the number of doctors to one, and remove the “substantially and irremediably” qualifier — abortions would be allowed in cases where a mother’s mental or physical health is threatened, even if the damage can be reversed.

Another decision that has energized the pro-life movement was recently made in New York, where Catholic Governor Andrew Cuomo has supported the Reproductive Health Act that expands the type of health-care practitioners allowed to perform abortions. The act also allows for late-term abortions if the health of the mother is at risk or the fetus is not viable. Under this new law, abortions are allowed in New York before the end of the 24th week of pregnancy, or later if an abortion is “necessary to protect the patient’s life or health” or if there is no “fetal viability” — meaning there is no ability for the fetus to survive outside the womb.

View all posts by seanhigh →