You are here: Home » Nine Student Athletes Sign to Colleges

(COVINGTON, La) —  Every year, seniors around the country sign to play their respective sport in college. They spend most of their lives practicing and perfecting their game and getting good enough to play at the next level. This year, St. Paul’s has had nine student athletes sign scholarships so far.

“The expectations of St. Paul’s coaching staff and philosophy of St. Paul’s Athletics tend to produce athletes with the qualities colleges seek in a student-athlete,” said Athletic Director Craig Ketelsen. “St. Paul’s prides itself on producing hard-working, academically strong, fundamentally sound, team-oriented athletes who can compete at any level.  The athletes leaving St. Paul’s are looking for an opportunity, not expecting a guarantee.  I believe strongly the strong academic program and disciplined environment are key factors in making our athletes attractive to college programs.” 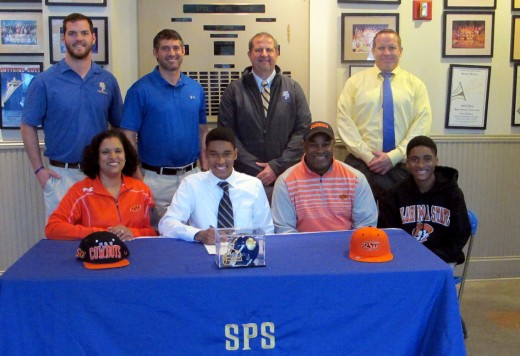 A SPS senior soccer player will be competing at the Division I level next year, as well. Colin Hanley signed with Niagara University in Niagara, N.Y.

“It’s really cool because I’ve worked a lot of my life to reach this goal and I’ve finally achieved it,” Hanley said. “It was mainly just going to campus and getting a feel for the people there. I loved the atmosphere on campus and they offered me great opportunities on and off the field. Plus, it’s different part of the country, and I’m excited to experience new culture.” 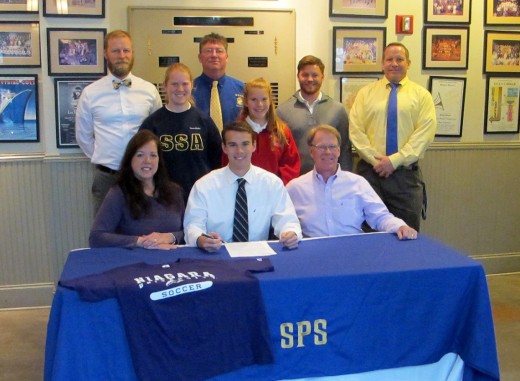 One SPS senior will be swinging for the greens in Division I events, as Beau Briggs signed with the University of Mississippi in Oxford, Miss., to play golf.

Jean-Paul Juge signed with the University of Dallas in Irving, Texas, to play Lacrosse.

“It’s really exciting, and it puts my senior lacrosse season in a different perspective. It’s nice knowing I won’t have to stop playing lacrosse after high school,” Juge said. “I was really drawn to the University of Dallas because of its academic reputation and its Catholic identity. The lacrosse team was also a draw.”

As these talented seniors prepare to embark on their new careers in the fall, Ketelsen tells them to have faith in their decisions.

“I tell them to choose and don’t look back. There really is no ‘right’ or ‘wrong’ choice,” Ketelsen said. “There can be several possible great choices for a student. When he picks (a college), he should never question his choice. He should move forward, believe in his choice, and he should trust his heart when tough future decisions need to be made. He doesn’t have to be like everyone else – he was never just like everyone else in high school, so why change?  Do what he has been taught and knows is right, and things will turn out just fine.  Last, I tell them we are always here if he needs us for anything.”