There is dedication that persists years, decades, and centuries, and then there is the dedication of Christian Brothers like Bro. Alfred Baltz, FSC. 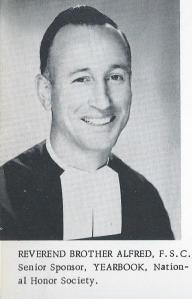 Bro. Alfred’s life at St. Paul’s is almost unparalleled by anyone on campus. (Photo from The Conifer 1959)

Since 1936, Bro. Alfred has been fulfilling the Lasallian mission as a Christian Brother. After these 80 years, the son of a Catholic El Paso dentist has shepherded generations of students after his chance introduction to the brothers during hunting and fishing trips.

“We were just little kids, and we got to know the brothers as older members of our family,” Bro. Alfred said. “I first came to St. Paul’s in 1936. I was a freshman at our school in Lafayette taught by the brothers to boys who were preparing to become brothers, and we took a vacation to St. Paul’s every summer, two weeks before we started our summer school classes.”

This introduction and training in the lifestyle of a brother led to a transfer to St. Paul’s two decades later.

“I didn’t come back here to St. Paul’s to teach until 1955,” Bro. Alfred said. “In 1955, I came here, and I taught chemistry and physics at that time, and religion and some other subjects, but that was the year that the chapel burned. That’s something that, probably, we’ll never forget.”

Bringing the Heat… of Knowledge

“It was a very cold winter morning,” Bro. Alfred said, “and I had already finished breakfast, and I was (on) Dixon Hall’s second floor, which was sort of a study room for the brothers; a boy came running up the steps and banged on the door and said, ‘The chapel’s on fire!’ Well, I thought he was kidding, because we had just been in the chapel. So I went over to the window and looked out, and sure enough, smoke was pouring out of the ceiling (and) the roof.”

The day’s chaotic happenings were worsened after what happened next.

The chapel fire of 1955 destroyed the all-wood structure, with very little being recovered. (Photo from SPS 75th Anniversary Album)

“The city came rushing over with their firetrucks and hooked up to the main line, expecting to find pressure enough to reach up to the roof of the chapel,” Bro. Alfred said. “Well, the pressure wasn’t there, and it caught on fire, and there was just nothing we could do (but) watch it burn. Some students rushed there, they took pews out, they took vestments, they took the Blessed Sacrament out, they did whatever they could, but it was a total loss. Ashes.”

The salvation of important chapel paraphernalia was one of the few bright spots of a day that led to the conversion of the Alumni Memorial Theatre, then a gymnasium, into a makeshift chapel until the current one was built in 1964.

Bro. Alfred’s chemistry career took place in the same places where students learn chemistry today, in the Main School Building. One of the rooms he instructed in is now Biology teacher John Carambat‘s, and Bro. Alfred says it has a unique feature that should fulfill its function once more.

“If you look up from the street to the windows, you will see a little half-inch pipe sticking out about six or eight inches,” Bro. Alfred said. “That has been there since as far back as I can remember, (and it) was certainly there in ‘55. It was an entrance for bees into a large beehive that was glass-enclosed in the lab. So, as the year went by, the students were able to see the bees building a large hive, and that was very interesting. It would be great if they could do that again today, but I think insurance policies or something (prevent that).”

Insurance would most likely not approve of other lab accidents that dotted Bro. Alfred’s unique teaching career.

“There’s an experiment… where at the very top of the page, it says, ‘absolutely no open flame in this experiment.’ It went very well, except at the very end, one of the boys took a match… and he lit that match just for fun, I guess… and he flipped it into the trash basket where they put all the filter papers, so boom! all that stuff flew up to the ceiling and fell down on some shelves that we had along the wall,” Bro. Alfred said, “and those shelves stayed there until the renovation of the school recently. The room is still there; it’s the room that’s used by Lee Pierre.”

LaSalle Hall boxing matches topped a lifestyle that seems a paralell universe in today’s education lifestyle. The front doors in the bottom picture are in the same spot that hundreds of students still walk through today. (Photo from The Conifer 1969)

Aside from fire escapades, other memories are still palpable for Bro. Alfred. Some are kept alive by monthly meetings of the Class of 1959 in downtown Covington during which they sit and talk about old times.

“Life by the students back in the ‘50s was totally different than what it is today,” Bro. Alfred said. “During the week, we would meet and plan where we were going to go fishing and hunting on the weekends. It was a good life. And we played a lot of games of baseball and football and whatnot with the students. It was just a different world.”

“I retired from teaching after 50 years in the classroom… in 1995,” Bro. Alfred said. “I’ve been retired and living in this retirement home with some of the brothers that I lived with and taught with in various schools throughout the district. I never thought I would live to see the year 2000, much less the year 2016.”

A Lifestyle of Service

After all of his time and effort caring for youth, which included the introduction of an award in his honor for 50 or more service hours performed by students, Bro. Alfred now has people that can care for him, essential after he fell on Monday, Dec. 21, 2015.

“(I) got myself all banged up… I’m just now getting back into shape,” Bro. Alfred said, “and I don’t know exactly how long it’s (going to) take me before I can get back in that shop and start doing things that I love to do.”

The most beloved of Bro. Alfred’s hobbies is carpentry. His workshop has been the spawn point for many of the podiums, bulletin boards, and other wooden creations that can be seen all around school currently used in daily instruction. The staff of the brothers’ residence is steadily allowing Bro. Alfred to achieve his goal of returning to the shop.

“We have the most wonderful nursing staff that you could imagine,” Bro. Alfred said. “We’re blessed. I never in all my dreams thought I would retire into a home where I would be taken care of by nurses and nurses’ aides.” 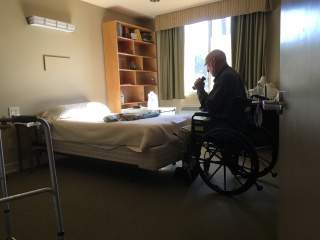 Bro. Alfred takes his recovery process day by day, hoping to return soon to the lifestyle he treasures. (Photo by Nick Ashton)

During our conversation, we had a surprise guest appearance of Bro. Ralph Baltz, FSC, the blood brother of Bro. Alfred.

“He is 95 years old. I am 93. And I never lived with him in all these years until he came and retired here to this retirement home,” Bro. Alfred said. “That’s the first time we were ever together after he left and became a brother with our oldest brother, Leo. That’s an example of our life here. You would not think that a 95-year-old (would) walk up to the door like that and greet you. But, life’s been good to us.”

Although it is different from most people’s idea of the good life, Bro. Alfred says the experience has been worth it all.

“When the brothers invited me, I was finishing the seventh grade. At that age, you really don’t know what lies ahead. You’re just sort of looking at older members of the family, looking at parents, your lifestyle, what was going on, and it’s really ‘I’ll try it’ more than ‘Yeah, that’s what I want to do,'” Bro. Alfred said. “I just said, ‘Hey, that looks like a pretty good life, these are great guys, and they’re prayerful, and okay. I’ll try it.’”

Reflections of a Successful Life of Pedagogy

Teaching is a blessing. I can’t think of a more wonderful vocation if you really accept it as doing something very worthwhile and making it a plan of life,” Bro. Alfred said. “For the brothers, it was not just that, but it was a total commitment of our life to the work of Christian education.”

To Bro. Alfred, the nature of St. Paul’s School’s students has changed from its days as a boarding school, but his and the school’s mission has not.

“When the borders came, they were often referred here by a judge. We took all that in stride, and we tried to make them better men and help parents do that job. I have felt great sympathy for teachers who did not feel at home going to a classroom,” Bro. Alfred said. “We learn a lot from the students. I’m grateful to all the students that I have ever taught for their goodness of putting up with me and going along with me to learn and develop their minds and hearts. I beg for pardon of the guys for the times when I offended them, because I’m sure that through the years I stomped on more than one foot. But what a wonderful thing to look back on all the guys. I just say, ‘God bless them.'”

Looking back, Bro. Alfred has one piece of advice: Do not forget why you are here.

“There are some things that we are exposed to in a Lasallian school: the presence of God, the fact that we are His children, that He lives in our heart. I would say, try to make strides in that awareness of God’s presence, and how much we need Him,” Bro. Alfred said. “When life is over, and it’s going to end for every one of us, we’re going to appear before him, and we’re going to either be joyful in meeting Him or we’re going to have a lot of regrets that we didn’t get closer to Him.” 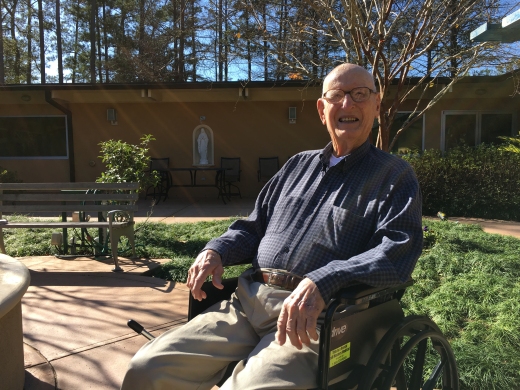 Bro. Alfred continues to enrich the lives of the students he interacts with, and will continue to do so for as long as he is able. (Photo by Nick Ashton)

Entertainment, Music
The World Around Us