2015 was the most successful year for The Paper Wolf yet, with nearly 100,000 views of the news site over the course of the year. Following are the top 10 most popular stories of the year. 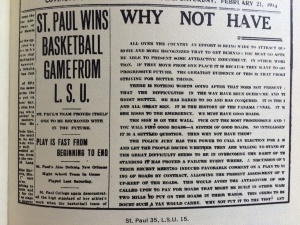 1- Dropping in at #1 with 4,250 views is“Top 5 True St. Paul’s Urban Legends” by Carson Caulfield. This story showcases five of the most surprising secrets of the campus. These secrets include St. Paul’s beating the LSU Tigers in a game of basketball, horse stalls on campus, a mini golf course, underground tunnels, and an underground shooting range. >>Read the story

Members of the Marching Wolves visit Junior Drum Major Ruston Keller at Ochsner Hospital over the summer. The band performed for Ruston and other patients in a show of support for his second surgery to take place the following day. He has since had a third surgery and has a fourth scheduled for later this year. (photo courtesy Marching Wolves)

2- With 2,069 views, “Junior Drum Major Working to Overcome Serious Illness,” written by Kyle Hladky, was the second most popular article of 2015. This article highlights the brave fight that junior Drum Major Ruston Keller is going through with the life-threatening disease ulcerative colitis. Ruston’s never-give-up attitude is one that all St. Paul’s students should follow. >>Read the story

3- “Student-Made Documentary Chronicles Life of Bro. Ray,” published by Nick Ashton, comes in at third with 1,974 views. This is a link to the Guerrilla Wolves student-made documentary that helps one to become better acquainted with St. Paul’s superstar President Bro. Ray Bulliard, FSC. >>Watch the video

4- By yours truly, with 1,681 views, is “2015-2016 Pre-Freshman Class Makes School History.” This story makes the historic class of 2020 known to the readers of The Paper Wolf, demonstrating that the future of St. Paul’s to be a very promising one. >>Read the story

5- Hoax announcement “BREAKING NEWS: BROTHER RAY TO STEP DOWN AS PRESIDENT” by Casey Fitzmaurice hit the scene at number five on the list with 1,530 views. This terrifying headline had hearts shattering all around the world, until many realized that this story dropped on April 1, 2015. >>Read the prank story

6- At number six is “Bessetti: The Man Behind the Myth,” written by Luc Hebert with 1,130 views on The Paper Wolf website. This article profiles one of the toughest teachers in Covington, highlighting his teaching styles and his lifestyle outside of challenging students academically. >>Read the story

7- “SPS Students Spurn ‘Creative’ Homecoming Dance Invitations” by Greg McNally is number seven with 988 views. This popular story demonstrates the struggle St. Paul’s students go through in order the find a date to the homecoming dance, showing a multitude of creative ways students used in an attempt to get a yes. >>Read the story

8- At number eight with 735 views is “Suspected Fowl Play Fuels Win Over CHS” written again by yours truly. This article made the disappearance of our beloved school pet, Marvin the Duck, known the public and tells the story of the Football Wolves avenging Marvin’s disappearance in a blowout victory against Covington High. >>Read the story

9- Nico Arcuri wrote “GODSPELL Will Leave Audiences Speechless” to the tune of 635 views. This review features a slideshow of the 2015 campus production of the musical “Godspell,” which is brought to life every five years by director Denny Charbonnet. The story and slideshow shows how captivating Godspell was for both the audience and the cast.  >>Read the story

10- Last, but hardly least, “‘The Outsiders to Bring 60s Teen Angst Back to Campus,” written by AJ LaCroix, rounds out the top 10 with 553 views. This story displays the work that the Marian Players put into their fifth production of “The Outsiders,” giving background and providing evidence for the success of the show in 2015. >>Read the story