On the final day of the lacrosse team retreat held at Camp Bocamb in January,  JV and Varsity lacrosse players gather before Mass to close the retreat.

The St. Paul’s Lacrosse team experienced the first ever team retreat this year. This new idea for the team was instituted by newly appointed Head Coach John Meibaum. It was an excellent experience that brought us closer to our teammates and our faith, and I hope it becomes an annual event.

On Friday, Jan. 15, 2016, the team met at Camp Bocamb in Folsom at 6 p.m. The boys got split up into cabins by position, and to my disagreement, our phones and keys were confiscated. After we got settled, we all met in the main hall and were introduced to the coaching staff and retreat director, Fr. Jacob DuMont. After Fr. DuMont introduced himself, he shortly introduced a nighttime game for us to play as a team. It was a variation of capture the flag including offense and defense, forcing us to work together in order to get our competitors’ balls onto their home base. After about an hour of our exciting new game, a bonfire was started, and players gathered around for warmth. Then, group-by-group, players wandered off to their cabins in preparation for a busy Saturday. 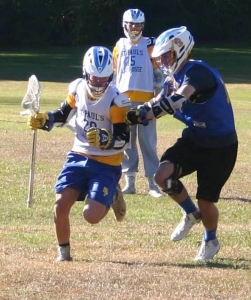 Freshman Chris Flood runs a drill with junior Patrick Flynn during the retreat.

On Saturday morning, all players were woken up at 6:30 a.m. for breakfast and then got ready for a special four-hour practice that was being coached by Andy Towers, head coach for Dartmouth College, and Jamie Hanford, professional lacrosse player for Rochester Knighthawks in the National Lacrosse League. The guest coaches showed us new skills and added new Northeastern flavors to our offense and defense. After a couple of inspirational speeches and exhausting drills, the two decorated coaches got on their way, and the players sat down to a nice lunch.

After lunch, we then opened heartfelt letters from our mothers, and we wrote letters back, as well. After that, players waited for one-on-one talks by the coaches by laying back and relaxing, or by doing the complete opposite and playing soccer or ziplining. Saturday’s events ended earlier than Friday’s, until the cabin-versus-cabin prank wars commenced between the offensive cabin and defensive cabin. Players had a rude awakening on Sunday morning due to the aftermath of the late night pranks.

Tim Hoy presents a jersey to his son, Colin Hoy, during a special father/son senior ceremony on the last day of the retreat.

When the dust settled, all players gathered in the main hall for breakfast and a dramatic ceremony of the senior dads presenting their sons with their jerseys. After the tear-jerking ceremony, everyone gathered for Sunday Mass, which was beautifully presided over by Fr. DuMont. To the players’ immense joy, they were given their keys and phones back. But most of all, they were given an experience of a lifetime.

(Photos by Herb Flood. For more photos from the retreat, click here.)