You are here: Home » Wolves Take on Impressive Edna Karr Cougars This Friday

(COVINGTON, LA) — The St. Paul’s Football Wolves are set to play the Edna Karr Cougars on Friday, Sept. 2, 2016, in Hunter Stadium. This annual matchup is highly anticipated for both the Wolves’ and the Cougars’ seasons, especially since this game is the first regular season matchup for both teams.

The Wolves are coming off of a successful 2015 regular season, finishing with a 9-1 overall record and a 7-0 district record. The Wolves finished off their season with a tough 37-30 loss to John Curtis in the playoff quarterfinals. 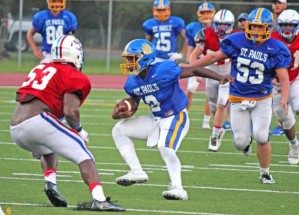 The Wolves started off the season with an impressive victory 20-6 victory over Rummel last Friday in their annual Jamboree.

The Edna Karr Cougars are coming off of an outstanding season as the class 4A state runner-up. The Cougars have started off the past few years with fierce and close battles against the wolves, and expect no different with the 2016 Karr Cougars.

Karr is led by senior Quarterback Aldon Clark, who is considered to be one of the most talented, and most athletic quarterbacks in the New Orleans Metro area.

Last Friday, the Cougars started off their season with a jamboree matchup against McMain. The Cougars showed off their offensive prowess with a 43-0 victory.

Last year, the Wolves defeated Karr 34-7 in an outstanding offensive and defensive two-punch knockout; this year, the Cougars will be looking for revenge in Hunter Stadium on Friday night.