(HAMMOND, La) — In February, 58 St. Paul’s students participated in the annual district literary rally at Southeastern Louisiana University, making a historical showing. The rally tests students on a wide variety of academic subjects, allowing two student representatives per subject from each school within the district. This year, 19 of the 58 students that represented St. Paul’s will advance to the state competition.

“I think this was an excellent year overall,” Assistant Principal Joe Dickens said, “We sent more people to state, we had more district qualifiers and we had more first place finishes. We also competed against tougher competition because the south shore shut down its (district rally) operations, so we had a lot more private and catholic schools coming to compete with us.”

The SPS students that successfully made it to state were Evan Cook in Accounting I, Patrick Baldone in Advanced Math – Functions and Statistics, Scott Woodward in Algebra I, Cullen Irwin in Algebra II, Isaac Hebert in American History, Joshua Devier in Biology I, Jack Nunez in Biology II, Yehia Elkersh in Civics, Andrew Smith in Computer Science, Brendon Dauterive in English I, Beau Franklin in English II, Luc Hebert in English III, Lester Guttuso in Journalism I, Max Teper in Physics, Davis Lagarde in World Geography, and Matthew Algero in World History. 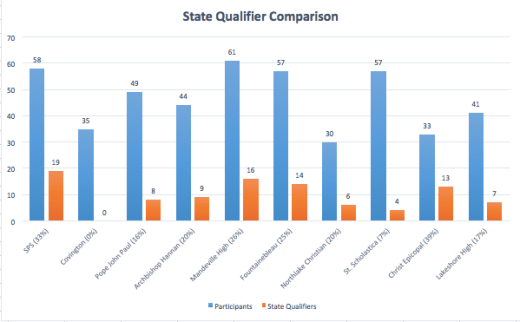 SPS is in Division II for the rally, which includes schools with enrollment of 501-1000. Despite the increased competition this year, SPS is sending the highest number of students on to the state competition compared to all other schools in west St. Tammany Parish. When comparing the number of participants to the number of state qualifiers, SPS earned the second highest percentage, next to Christ Episcopal.

The state Literary Rally will be held on April 1, 2017, at Louisiana State University in Baton Rouge.