Man On Campus: What is Your Lenten Sacrifice?

(COVINGTON, La.)– A tradition of the season of Lent incites many Catholics to either surrender a habit or action, or follow through with helpful deeds or obligations, such as the call of almsgiving.

A factoid on Lenten sacrifices is that some take advantage of Sundays not counting towards the 40 days of the Holy Calendar’s Lenten season. Known by some as  “grace days,” indulgence of your sacrifice is, in theory, permitted on the six Lenten Sabbaths, although this is often debated.

According to the Los Angeles Times, non-Catholics are also becoming more apt to use this Lenten tradition to either create a resolution, or pick up their lapsed one from  the New Year, for either a secular reasoning or a reason bound to their own faith.

With that in mind, The Paper Wolf asked various members of the St. Paul’s community:

What is your Lenten Sacrifice?

“I’m giving up Snapchat, candy, and Xbox,” freshman Mason Byrne said, “and I will go to confession more. Things like Snapchat really took my eyes away from life.” 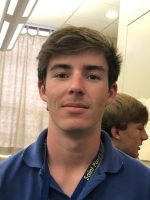 “I’m going to start going to church,” sophomore Beck Heebe said, “because it is the right thing to do.”

“I’m giving up speeding, because I used to speed a lot,” junior Timothy Levet said.

“I’m trying to give up things like soda and snacks,” senior Josh Tourelle said.