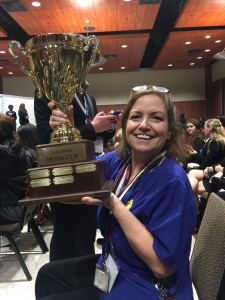 (COVINGTON, La.) — Once again, the inaugural brood of students from the St. Paul’s HOSA chapter bring word of new accomplishment. At the State Leadership Conference for Louisiana HOSA, an event which spans three days and is held at the University of Louisiana at Lafayette, the students involved were movers-and-shakers who very rarely had time for a break.

“(At the event), students compete in competitive events, learn in informative workshops, meet other students with common interests, and most of all, have fun,” club member Andrew Norlin said.

SPS students won either first, second, or took both places in 10 different categories. These awards were received among two other state recognitions: “Chapter Reflection Book” and “National Service Project for National Alliance on Mental Illness.”

To top off their myriad of awards, the HOSA Wolves put much effort this year to receive the greatest award the conference has to offer, the HOSA cup.

“Chapters gain points by telling Louisiana HOSA about various events that the chapters plan and take place in along with attending conventions throughout the year,” Norlin said. “After the points were tallied with a last minute addition, the HOSA Wolves clenched the HOSA Cup. We are proud of our boys for representing themselves in an exemplary fashion and redounding the St. Paul’s Mission.”
As a bonus, Norlin and Devier were issued scholarships for their individual accomplishments. Norlin received a $1,000 scholarship to Johnson & Wales University in Providence, Rhode Island, while Devier accepted a $750 scholarship to the same institution.

Colin is a junior student who serves as the St. Paul's columnist at the Times-Picayune for the 2017-2018 school year. At The Paper Wolf, he serves as the News Editor. Primarily, Colin focuses on the school's clubs and happenings, as well as local news. If you wish to contact him in reply to an editorial, send photos or press releases, or just to say hello, please send an E-mail to colin.rice.2019@stpauls.com. View all posts by Colin Rice →